Partly because I’m a fan of Ray Banks, and partly because I want to see how this plays out, I signed up for MATADOR: a 7-part serial available on the kindle. Total cost: $1.99. Beginning on November 20th 2012, one episode out of seven will be published, and the subsequent six episodes will be sent in two-week intervals. Subscribers receive e-mail notification when each new episode is available.

According to Amazon, episode one is 55 pages and the blurb says this:

A man wakes in a shallow grave next to a corpse to find himself shot, amnesiac and in deep trouble. Meanwhile, an expat drug runner finds out that he’s not the killer he thought he was.

In some ways this has been done before. I’m thinking of the Cornhill Magazine which in 1860 (according to some sources) began featuring the works of many notable writers in serial form, but the reading of novels in carefully parcelled out sections has been passé for years. The world of the ‘printed word’ is changing, and here’s someone grabbing an opportunity in the new still-shifting paradigm. Perhaps I’m easy to please, but I can’t help but be excited about this new serial. Since e-readers open up worlds of possibilities for readers and writers, will we see more of these in the future?

Beast of Burden by Ray Banks 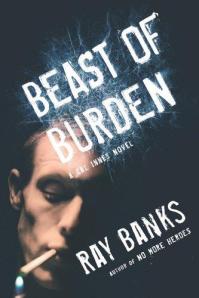 For the title of Ray Banks’ fourth and final novel in the Cal Innes series, I have to think that the Rolling Stones song played some role. In Beast of Burden, Manchester PI Cal Innes is dogged by two old enemies: Detective Donley (otherwise known as Donkey) and crime lord Morris Tiernan. There’s a lot of history between Cal, Donley and Tiernan, and Beast of Burden finds Cal weakened badly, walking with a cane, and barely able to speak following a drug-related stroke. His condition leads both Donley and Tiernan to believe that they can finally own Cal. But Cal is no one’s bitch, and as the Stones song says: “I’ll never be your beast of burden.”

Cal and his partner Frank run their PI business out of a boxing gym for ex-cons run by a friend named Paolo, and when the book begins, Cal is hired by Tiernan to find his missing son Mo. Tiernan cast Mo off some time before and now Mo has disappeared. Cal doesn’t share the Mo Tiernan case with Frank, and he uses Frank’s distraction with another case to search for Mo on his own. Exactly why Cal wants to fly solo becomes apparent as the book continues.

Meanwhile Detective Sergeant Donley “Donkey,” up to his old ways, is in hot water in the department. Cal’s brother addict Declan was once Donley’s grass, but now that Declan is dead, Donley’s interest in Cal increases. Donley thinks that Cal will make the perfect replacement for his brother, and once Donley learns that Cal is investigating the disappearance of Mo Tiernan, he wants in on the action.

The book goes back and forth between its two narrators–Cal and Donley. Cal tries to find Mo, and Donley’s always one step behind with the goal of owning Cal and also of nailing the Tiernans. Donley has to be one of the nastiest fictional coppers ever created. He gravitates towards the weaker, bottom feeders–people he can threaten, manipulate, and thrash, so naturally Cal, called “Mong” by Donley, falls into that category.  Here’s Donley hassling Paddy, “a nine-carat smackhead.”

I drew my car up alongside Paddy as he walked. When I honked the horn, two short bursts, he near shit himself.

“That’s not much of a hello, is it?” I cranked the wheel, jumped the pavement. This lad wanted to pump his feet, I could keep driving, run the bastard down. I flung open the car door and he back ed up a couple of steps. I got out of the car, pulled out my baccy tin, started to roll a ciggie. “Were you going to run there, Pads?”

“Nah,” he said, wiping his feet like he had an itch on the soles.”I wouldn’t run Sergeant.”

“Right, Detective. Not daft enough to run, am I?”

“Used to be a fuckin’ rabbit, as I recall.” I looked around the street, but the place was dead apart from a slow rain that’d started as soon as I left the poof’s club. Right enough, most people who lived out here, they’d still be in their kip, sleeping it off.

Donkey decides there are no witnesses:

“How’s about you and me, we go up that alley over there? I think we need to have a quiet word.”

I pointed up behind him. An alley, long and narrow, boxed in high on both sides, led to the other estate. Looked like the kind of corridor Paddy used to squat down when he was committed fully to smack and fuck knows what else. He obviously didn’t like the idea, pulled another De Niro face.

I put a hand on him, pushed him in his hollow chest towards the alley. He was a streak of piss, nearly buckled under my shove, and when I pushed him again, he flinched like he was set to come back at us.

Yeah, he wanted to get fucking bolshy, push us back. But he knew, he put the finger on us, I’d have him back in a piss-soaked cell, the kind with the thick stink that got right in your clothes. See how he fancied going back to his ‘mate’ with that smell on him.

Paddy trudged into the alley. I checked behind us, made sure there was nobody with a nose on them, or about to do one with my car. Then I followed him, rubbing my hands to get them warm. I saw the puke and broken glass on the ground, reckoned this’d be perfect.

Beast of Burden is for those who like their gritty crime novels dark & hardboiled. I loved it. For those interested, I had not read the other titles in the series before reading Beast of Burden, but this did not get in the way of my enjoyment. While Cal has a sorry history with the Tiernans and Donley, past incidents are referenced and can be understood. I now own all four books in the series.

My copy read on my kindle courtesy of the publisher via netgalley.