Death of a Busybody: George Bellairs

“She was a perfect vessel of wrath.”

It’s a wonder that some people make it to old age, and in the case of village busybody, the highly unpleasant Miss Tither, who is 50, it’s a miracle she’s made it this far. When Death of a Busybody by George Bellairs (Harold Blundell 1902-1985) begins, the wonderfully named local vicar Rev. Ethelred Claplady has just woken up and is breathing in the fresh country air. On one side of the house the air is fragrant, but on the other side … there’s the stench of the cesspool being cleaned by the vicar’s handyman. Just then the vicar spies village busybody, Miss Tither haranguing Haxley, the local atheist in a country lane. While she’s the self-appointed moral guardian of the village of Hilary Magna, she’s mainly obsessed with “sexual” sin.

Miss Tither, “rather long in the tooth,” as the Squire described her, was about fifty years of age and had sufficient means to pay for domestic help which released her to poke her nose into the affairs of everyone for miles around. She was scorned and snubbed by most, but carried on her secret investigations and remedial campaigns against sin and vice with abhorrent fortitude. The village quailed in fear of her. Husbands, raising their hands or voices against their wives, paused at the thought of her. Scolding wives pitched their nagging in a lower key, lest Miss Tither should be in the offing. The lecherous, adulterous, drunken and blasphemous elements of the population held her in greater fear than the parson and looked carefully over their shoulders lest she be in their tracks.

Since the title of the book gives away the murder here, author George Bellairs wisely doesn’t waste time with much in the way of preliminaries. Within a few pages, Miss Tither is dead, bludgeoned and stuffed into the cesspool. The vicar sounds the alarm and word spreads through the village.

While Miss Tither had a great number of enemies, her behaviour has been consistent for years. Why is she murdered now? Is her death connected to the arrival of her missionary cousin? What are the latest juicy scandals brewing in the village? 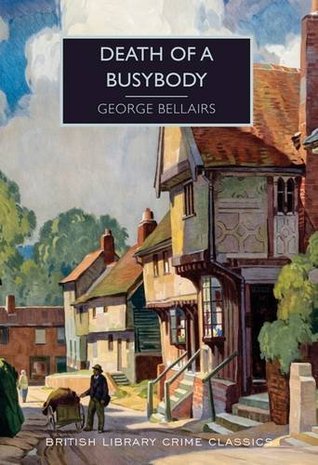 This is a well-paced tale, a police procedural which is made lively by the colourful personalities of some of the characters. It’s the small touches here, the best and worst of village life, that make this a humorous read, so the murder happens as the police are alerted about a lost Pomeranian. While I didn’t feel as though I got to know the series character, Chief Inspector Littlejohn well, I liked the detail of Littlejohn buying and then sending his wife two pounds of fudge. PC Harriwinckle’s domestic life, which is mainly seen around the table, adds to the tale.  As the investigation continues and dips into various lives, tertiary characters appear as wholly developed. Such is the case of former school teacher Miss Satchell, who now owns and operates a successful tea-room, and Mr Titmuss (who develops an interesting relationship with Sergeant Cromwell).

The book also includes prejudices of the day with the locals seen (and described) as smelly–so much so the coroner has an unpleasant time at the inquest. And there’s a scene of hunting which culminates in the local bobby bludgeoning a rabbit wounded by a huntsman who’s a notorious bad shot.