Towards the end of 2018, I started thinking about which books would make my best-of-year-list. Several of the titles I’d read this past year came to mind, and I began to think that I would, perhaps, have a difficult time narrowing down just a few titles to the list.

A husband returns home to find his wife battered to death. The investigating detectives tell the husband, Leonard Henderson, to write down his statement, so we get his version of events which is contrasted to his memories of growing up with a cold, critical mother, and his marriage to the murder victim, Enid. Yes this is the story of a murder, but it’s also the story of a marriage (always impenetrable to outsiders). This is the first book I’ve read by Celia Dale, and it was on my shelf far too long before I finally picked it up. The tale is an insightful look at a claustrophobic marriage and I’ll be reading more from this author who now seems to have faded from view.

A middle-aged, married antique seller gets a new lease on life when an attractive female customer walks into his shop. Narrated by 39-year-old Sam, this tale of a man who feels hampered by family life, ‘could’ be very 70s in its portrayal of a man who springs free of his commitments. Instead, in the capable hands of author Stephen Benatar, we see a selfish twerp with illusions of an acting career who proceeds to blow up his very comfortable life. While Sam may think his infidelity is paramount to a heroic selfless act: “one thing was sure … both of them would benefit. I’d be doing it for the three of us,” in reality, even though Sam is in control of the narration, we begin to wonder just who puts up with who in Sam’s marriage.

Told in retrospect, this is the story of short, but significant period in the life of 12-year-old Kate who lives with her mother and stepfather, a doctor. It’s 1953, and a friend of Kate’s mother comes to live with the family. The guest is a rather gossipy but supposedly good-hearted woman, and her arrival sparks a series of events. Through these event, Kate learns that life is not black and white. I usually dislike books written from the child’s perspective but this tale, told with an adult’s view, is simply marvellous. This was the second novel I’d read by Bawden. I wasn’t that keen on the first so I’m happy I tried again.

If forced to pick ONE book as the best-of-the-year, then The Good House would be the choice. I read this early in the year so it set a high standard for comparison. This is the story of a high-functioning alcoholic, a divorced real-estate agent who thinks her drinking is no one else’s business. The unreliable narration here is tart, funny, and entertaining. I laughed out loud several times and was sorry to see this one end. Brilliant.

One lazy summer, Matthew stays at the vacation home of his much wealthier cousin, Charlie. Matthew’s grateful for a place to stay while he mulls over the next phase of his life, but does Charlie really want Matthew there?  Matthew has a thing for Charlie’s second wife, Chloe, and when Matthew discovers that Chloe is having an affair, he finds himself in a moral dilemma. Should he tell Charlie? Nothing is quite what it seems in this novel.

A Change in the Lighting: Amy Witting

Amy Witting is a great favourite. and I knew I’d love this novel. A Change in the Lighting is the story of a middle-aged woman who is floored when her professor husband casually announces that he wants a divorce.  Ella whose whole life for the past 30 years has been raising three children and taking care of the household, doesn’t know what to do. She teeters on the edge of madness but sinks into elaborate rug making. Her children take sides in the divorce war, and yet .. in spite of everything that goes wrong, Ella finds that her life expands into new territory. Witty and wise.

A Wreath of Roses: Elizabeth Taylor

Two childhood friends, Liz and Camilla, spend the summer at the home of Liz’s former governess, Frances. The novels examines the choices made by these women and how taking chances opens up the possibilities of hurt and even danger. In life, we make our choices and then wonder if they were the right ones. Elizabeth Taylor takes that central idea and runs with it. This is a very dark novel. When I picked it up, I wondered why the title was A Wreath of Roses and not a vase or a bunch etc. The word wreath reminded me of death…

A middle-aged woman who married decades earlier on the rebound finds passion, but will this end happily? No of course not. This is narrated by a woman who seems in control of her passions, but is she? She functions well as an employee and a wife, but like an iceberg, what you see on the surface is only a fraction of what’s there. She may seem in control, but once unleashed, there’s no telling what may happen.

A middle-aged woman goes off the rails when she becomes infatuated with a self-absorbed, married academic. A deranged narrator who is also unreliable. How can you go wrong? This was close to being my best read of the year….

Accident on the A-35: Graeme Macrae Burnet

A man dies in a car accident and a police detective investigates. In one sense this is a police procedural (my least favourite crime novel),  but has a crime even been committed? As the investigation continues, the detective finds that the inhabitants of this small French town are less than cooperative. But the crime/investigation is not the main story here: surely it’s the view of small town life, frustrated ambitions and a disintegrating marriage.

A wealthy young man persuades an older woman, the mistress of another man, to become his mistress. The young man cannot live without this woman–or so he thinks, and then he gets her… this rather cynical (realistic) look at love and passion peels back the human psyche and it’s not pretty. But that’s why it’s such a great book.

Tagged as best of year

The Accident on the A-35: Graeme Macrae Burnet

“You think police work is all about brainwork. It’s not. It’s about telling a story.”

Police detectives must, by the nature of their jobs, drop into the messy points of people’s lives. This is certainly true in Graeme Macrae Burnet’s The Accident on the A-35. Bertrand Barthelme, a prominent lawyer in the town of Saint Louis, is found dead at the wheel of his green Mercedes. It’s a rainy November night, and the simple explanation is that the driver fell asleep at the wheel and careened off the road colliding with a tree. 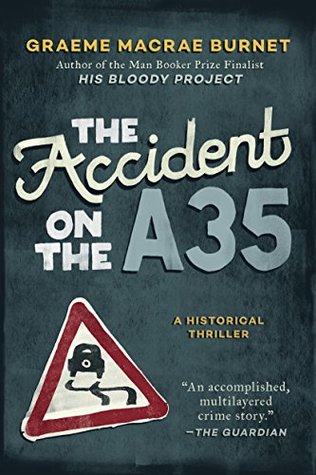 Chief Inspector Gorski, who always contemplates the methods of his much more popular predecessor, is determined to keep an “open mind” about the accident. Gorski decides to break the bad news to Barthelme’s family himself–partly due to the status of the deceased. Saint Louis, “a place of little note, situated at the Dreyeckland, the junction of Germany, Switzerland and eastern France,” is a small, suffocating town, where everyone knows everyone else, and a few families, the old money families, pull a lot of strings.

The town’s twenty thousand inhabitants can be divided into three groups: those who have no aspiration to live somewhere less dreary; those who lack the wherewithal to leave; and those who, for reasons best known to themselves, like it.

Gorksi visits the Barthelme mansion which is guarded by the housekeeper, Thérèse, an unpleasant woman who has been with the family for years. Ushered into Lucette Barthelme’s bedroom to break the news, Gorski is surprised to discover that the new widow is young and attractive, but then, after all, she was Barthelme’s second wife. When Gorski breaks the news of her husband’s death, to Lucette there’s “something curious in her subdued response.” Ditto the son, Raymond, who has been listening to the movements of the late night visitor.

Even though no one (except perhaps Thérèse) mourns Barthelme’s death, Lucette asks Gorksi to look into the accident that killed her husband. According to Lucette, he was at his club and would not have been on that particular road at that time of night, and so Gorksi begins to poke around ….

The death of Barthelme should be an open and shut case, but Gorksi isn’t quite satisfied.  After questioning the dead lawyer’s acquaintances, Gorski hits a brick wall, but then he begins to make a connection to a high profile murder in another town.  Influenced by his desire to keep contact with the lovely widow, a damsel in distress who meets Gorksi in her negligee,  Gorksi, who finds any excuse to knock back alcohol, embarks on an investigation that appears to be blocked at every turn. He’s the object of disrespect at the police station and only has the job because of his father-in-law, the Mayor. Then there’s Gorski’s marriage which has long since been flushed down the toilet–even if Gorksi hasn’t quite grasped that. Gorski vacillates between thinking he misses his wife and enjoying the luxury of a sort-of holiday from her.

While this sounds like a police procedural, that is too inadequate a description for this unusual, engaging crime novel. The novel has a feel of Simenon, but ultimately The Accident on the A-35 cannot be filed away quite so neatly. Two marriages are under scrutiny here: and in both cases, people married ‘up’ and lived in oppressive circumstances. The death of Barthelme frees his widow and also unleashes Gorksi to indulge in the ultimate investigation mistake: squeezing a crime into a created narrative. This is a compelling tale which captures the oppressiveness of small town life, the lure of distractions, career and marriage frustrations and yes, also, the death of a prominent lawyer. There’s one brilliantly created scene that takes place at a restaurant between Gorksi and his wife. When it seems that Gorksi has been stood up, with simmering resentment and deep humiliation in front of the other smirking customers, he orders for himself.

Gorski got up, knocking the table with his thigh. The wine bottle teetered for a moment, before Céline reached out and steeled it. She allowed him to kiss her on both cheeks. In her heels, she was half a head taller than him.

He mumbled an apology. “I assumed you weren’t coming. The kitchen was closing.”

Céline looked at him. “You’re drunk. she said.”

This is, of course, a power play, a marital maneuver, in which Céline takes revenge for earlier humiliation, knowing that her husband will polish off a bottle of wine before her grand entrance.

The novel purports to be written by the now deceased Raymond Brunet and translated by Graeme Macrae Burnet. I was only annoyed by these diversions and thought the novel stood strongly without that extra wrapping.

Thanks to the Gerts for recommending this.