Louise Candlish’s novel, The Heights, is a story of revenge told through several voices including a mother who lost her son in a senseless car accident. It’s the sort of book that causes readers to question how we would act in the same circumstances.

The story is mostly told by Ellen Saint, but there are also sections that are written by a journalist who is sitting in a writing class also attended by Ellen. Middle-aged Ellen Saint is married for the second time to Justin. They have a daughter together, Freya. Ellen, an interior designer, also has a son, Lucas, by her ex-husband, Vic. When the novel opens, Lucas is dead. He died in a horrible car accident in which his friend, Kieran, drove.

So here’s the backstory: Lucas attends an upscale school, Kieran, the product of a broken home is placed at the school by his foster mother, Prisca. Kieran, with a history of drug problems, learning difficulties, and rough edges riles Ellen immediately. She resents Kieran and his friendship with Lucas. To Ellen, Kieran leads Lucas astray; under Kieran’s influence, Lucas skips school, takes drugs, lies to his parents, and begins failing classes. So in other words, Kieran is every parents’ nightmare. Following Lucas’s death, Ellen is driven by only one thing: revenge.

As far as Ellen knows, when the novel opens, Kieran is dead and she begins with the statement.

It can’t be Kieran Watts, I tell myself. And if anyone can be sure of that it is me.

Because I’m the one who killed him.

Then why is Kieran alive and well in London? Or is Ellen, who has had other mistaken ‘sightings’ of Keiran in the past, wrong once again?

That’s enough of the plot…. It was hard to be in Ellen’s head. She is so full of hate and rage, that her mind is not a pleasant place. On one hand, since she lost her son due, rage is one option, but the majority of the novel dwells in this rage-filled place and it’s tiring. I had issues with Ellen almost immediately. There are indications that she’s a bit ‘off.’ The way she turns to her EX. The way Lucas is never at fault. … Anyway, this is a compulsive read–if only to get to the basic truths of this situation. I wish Ellen had been a bit more sympathetic.

“Was it any wonder he did what any other desperate person would do? Gather all the alcohol he could find in the house and drink every last drop of it.”

We’ve all had problems with neighbours at some point or another, so there are a lot of horror stories to share. Perhaps that’s what makes Louise Candlish’s novel Those People so readable. Once I picked this book up, it was hard to put it down. 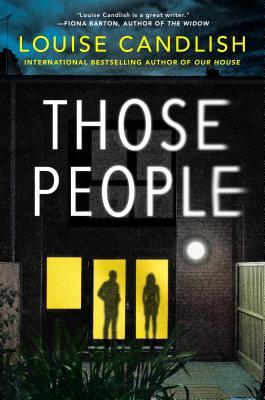 The novel is set in a London suburb: Lowland Gardens. It’s just a short jog over to the horrors of the poverty stricken, crime-ridden Loughborough estate, so the people who live in Lowland Gardens, mainly young couples with children, are all too aware that crime lurks nearby. These houses have risen steeply in value over the last few years. People are proud to live there and everyone pulls together to keep up standards. Everyone that is … until Darren Booth and his wife Josie move in. …

While the cat’s away, the mouse was staging some sort of coup d’état.

Number 1 Lowlands Way, a semi-detached house, has stood empty for some time following the death of the owner. It’s of no small concern to the other residents of the street as the council recently tried a landgrab. Most of houses don’t have off street parking, and so parking space is an issue. Darren Booth moves into number 1 and immediately pisses everyone off.

The first clue that something was amiss that Friday evening was that the parking space outside his house was occupied by a filthy white Toyota so decrepit it was bordering on scrap. Certainly not the vehicle of anyone he knew on Lowland way.

First there are amateur repairs (which include sketchy scaffolding) taking place all hours of the day and night. Then there’s the heavy metal rock music played in the wee hours. Then if there wasn’t already too much to tolerate, Darren brings his used car business to the estate and starts flogging cars in the once posh neighbourhood.

All of this could almost be funny. There are several snobby people in the neighbourhood, and the snob squad is led by Naomi Morgan one of the estate’s Great Organisers. Naomi is one of those ultra efficient, brisk, perfect women whose word is Law. Several of the neighbours attempt remonstrating with Darren; his music for example has made it impossible for the baby on the other side of the semi-detached wall to sleep, and that’s when Darren’s nastiness surfaces. He drives the neighbours crazy and while the horrified neighbours band together to complain to various official/legal channels, there is basically nothing they can do but live with the situation as all legal channels move as fast as frozen molasses.

The situation is a powder keg, and so inevitably things explode: Naomi and her much-over shadowed sister-in-law Tess created Play-out Sundays, so on Sundays the street is closed off and the children play outside. Everyone goes along with the plan and residents park on another street. But Darren Booth doesn’t comply with the established clan culture, and this leads to the first disaster.

I got to a certain point in the book, and then I realised that there was a lot more afoot. The plot begins with witness and neighbour statements which are taken by police after a horrendous accident takes place. There was still a good portion left of the book, and so I knew things were not as simple as they initially appeared.

Author Louise Candlish creates incredible tension between the characters. Events escalate rapidly and people find themselves in unexpected positions, trying to find solutions to an untenable situation. She also shows how Darren is a catalyst for other events that occur which cause the rot lurking beneath this posh neighborhood to emerge. Wives look to their husbands to ‘take care of things’ and then despise them when they can’t (legally). Naomi and Ralph have had the perfect life (which they like to flaunt through their constant suggestions for how others can improve their lives: “double glazing!!” ). Naomi’s domineering character emerges and she’s so used to getting her own way, that when she doesn’t, her rather off-putting nature becomes more apparent. And then there’s poor Sissy who is paying her mortgage by turning her home into a B&B (probably not the best idea..) and the B&B happens to right opposite Darren’s house… well there goes the neighbourhood.

At first opposition to Darren seems rooted in class, and class plays an enormous role in this tale. Darren doesn’t ‘fit’– he doesn’t ‘look’ as though he’s a homeowner, so Naomi’s (domestically trained) husband, Ralph, assumes that Darren is some cheapo worker employed by Number 1’s new owner. As the story develops though, it’s clear that while class may have sparked, and fueled divisions, Darren is a nasty person.

Reading the book made me think about how we so often just comply politely. Perhaps we don’t have enough skin in the game to thwart others or perhaps the stakes just aren’t worth it, but Darren senses he’s not welcome and then figuratively gives everyone the finger.

The plot wobbled a bit at the end, but for its genre, Those People is very well-done. While this may seem like a beach read, Those People tackles a lot of moral questions regarding our obligations to others. The neighbors, already subject to considerable marital/financial/social stress join together to band against Darren, but they are all self-interested at heart. Social media, and texts play a role as does surveillance–all ways for people to get themselves in trouble. It’s a good reminder that casual comments that may have no sinister meaning can quickly become incriminating under the right set of circumstances.