There’s a frenetic energy to Kris D’Agostino’s novel The Antiques which matches both its backdrop, an epic storm which engulfs Hudson, New York, and the lives of the Westfall family. When the novel opens, the Westfall family is in crisis, but I’ll back up here and say ‘crises.’ Yes it’s multiple; family patriarch George Westfall, cofounder of George and Ana Westfall Antiques, is dying of cancer. His wife Ana, hearty and healthy, but wrapped in her own concerns, isn’t sure how she’ll continue the business alone, and that brings us to the three Westfall offspring: sex addict Josef, daughter Charlie, out in California pursuing a career in publicity, and Armie, who still lives in the basement. 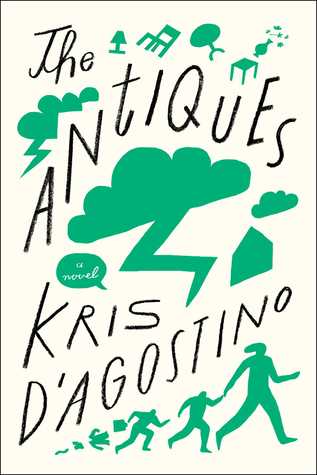 With George taking a turn for the worse, Ana begins frantically contacting Josef and Charlie, but they both ignore the desperate messages as they are deep in their own problems. In Josef’s case, the problems revolve around his sex addiction. He’s on the brink of making a huge, lucrative business move, and while he waits for news, as is typical, he distracts himself with thoughts of sex. Every woman, including his therapist, is a potential sex partner. This is a recently divorced man (no shock there) who buys used female underwear to sniff and claims that “it’s like my penis led me astray.”

Charlie works with P.Le.A.Se. Publicity LLC’s “most needy and lucrative client,” Hollywood starlet, Melody Montrose. Melody’s latest claim to fame is the starring role as a “vampire heiress” in  a “teen-fantasy saga based on a cycle of YA bestsellers called Thornglow.” Melody’s needy life is one publicity nightmare after another, and that leaves Charlie mopping up Melody’s messes and performing the work of a PA. There’s a pull between Melody’s petulant immature demands and Charlie’s personal life. Charlie has put her private life on the back burner, but after finding a pair of women’s underwear at her home, Charlie suspects her French husband is cheating. Meanwhile their son, Abbott is thrown out of school for violence towards another child.

As for basement dweller, Armie, he’s seriously damaged after being tangled in a questionable business deal which involved Josef and led to a stressful session with the FBI. He’s almost afraid to leave the safety of the basement, and yet love calls him in the shape of a young woman who occasionally offers to walk the Westfall family dog.

All the Westfall children converge on the family home, and there a drama unfolds over the sale of a valuable painting….

The book is well-paced and well-plotted but it is full of unpleasant people–I even disliked Ana, a character who should, technically speaking, be somewhat sympathetic. But it’s never a problem for me to read books about unpleasant people–after all, they’re usually much more interesting than ‘good’ people. But here, the characters were unpleasant and uninteresting–a deadly combination. Josef was a waste of good oxygen and Charlie … well there’s a telephone conversation that takes place between Charlie and another parent which left me shaking my head. While the author certainly mined aspects of today’s superficial culture, somehow that vapidity stuck to the plot with the result that I couldn’t wait to leave these people.

The Antiques is being compared to The Nest, and while I can see the connections: siblings and an inheritance, the resemblance stops there.  Most of the reviews of The Antiques on Goodreads are overwhelmingly positive, so I am in the minority opinion.