The Snowman by Jörg Fauser

Continuing with German literature month cohosted by Caroline and Lizzy, I selected The Snowman by Jörg Fauser for my crime pick. There are three reasons for this 1) Caroline has recommended the book more than once 2) It’s published by Bitter Lemon Press and I’ve had good luck with their titles. The third reason? The blurb on the back of the book starts like this:

Now that got my attention…

So, the novel begins with Blum, a strange character in his late thirties stuck in Malta with very little cash, but with a collection of Danish porn magazines “like vintage wine” to sell. It’s not exactly clear how Blum ended up in Malta or where the magazines came from, but it’s screamingly clear that the police don’t want Blum around. Blum’s unsavoury shady past follows him like a lingering bad smell. His one-month tourist visa expires in just 3 days, and he’s told to get out or he’ll be picked up and carted off to jail. But Blum needs money, and that means he has to unload the magazines as soon as possible. 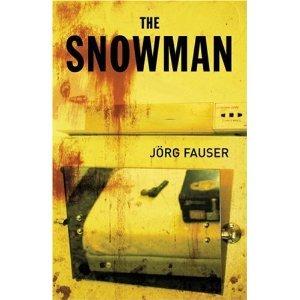 Blum is at that dangerous stage in life when his crimes and cons have become increasingly small-time, yet he still dreams of the big score. As fate would have it, a series of circumstances finds Blum holding 5lbs of uncut Peruvian flake–considered by some to be the very best cocaine in the world. It has a street value of about $600,000, but Blum learns that if you’re not a drug dealer with connections, it’s very hard to unload that much product. Sure, people want a free sample, and some will even spring for a gram or two but that doesn’t help Blum in his long-term plans to escape to some exotic location–say, the Bahamas:

He went back to the hotel, stuck the locker key to the inside of the lavatory cistern, stared at his money. He was going to be forty next week, and here he was in this room in a run-down hotel, unable to turn five pounds of cocaine into ready cash. And if he did, then what? He saw himself at forty-three, at forty-seven, at fifty-two, in other rooms, but all of them alike, with a shirt hanging on a dryer, a fly buzzing against the lamp, a radio playing “Spanish Eyes”, sirens howling, the level of whisky in the bottle going down, his heartbeats coming faster, and a telephone that didn’t ring.

The Snowman is heavy on atmosphere and character as the plot follows Blum’s inept and increasingly paranoid attempts to sell the cocaine. He travels from Malta to Munich, onto Frankfurt, and then Holland and Belgium, living in one dank, seedy hotel room after another and discovering that “by comparison, even the porn trade was a high-society occasion.” He has the urge to flee but lacks the funds to do so; he also fights the impulse to hide, but he can’t do that as he needs to unload the coke, so he’s caught in a dilemma: he has to take some risks to make a sale, but every time he lands a potential customer, he’s exposing himself to danger at the hands of the cocaine’s real owners. After one sordid deal after another, he eventually comes to some realizations about the drug trade:

Blum strikes up a relationship of sorts with a grubby blonde named Cora who reminds him of Brigitte Bardot “gone to seed”:

You can’t hide with five pounds of coke, not if you want to make money out of it. And now he’d landed himself with a blonde too, a tarty pot-head, probably with the police after her, but she was what he wanted. At twenty he’d dreamed of such blondes and jerked himself off. Now at forty he finally had one, even if she was shop soiled and run-down. But it was never too late for blondes.

Cora claims to have connections in the drug trade, and so Blum takes her along for the ride.

Author and journalist Jörg Fauser, according to the novel’s insert, kicked an addiction to heroin but was killed July 16, 1987 when he “wandered” out on the motorway. He’d been celebrating his forty-third birthday. The Snowman (which was made into the film Der Schneemann) is strongest in its depiction of the seedy underbelly of life –the cheap hotels, the filthy toilets– in every city Blum travels through, and there are some passages (including one about copulating cockroaches) that creates the urge for a good hot shower.  There’s an intense authenticity to these scenes, and a sour truth to Fred’s realization that he’s small-time for a reason.

“Stay happy on a small scale gentleman, because happiness is the most expensive drug of all.”