“It’s the bloke who spends the night in the haunted chamber who always cops it in the neck.”

Crimson Snow, a collection of crime stories set around the Christmas season is a perfect companion read to Mystery in White. Short story collections are a wonderful way to ‘try out’ new authors, and in the case of Crimson Snow, I had a reunion with Margery Allingham and met some new (to me) interesting authors. And here’s the line-up:

The Man with the Sack: Margery Allingham

Off the Tiles: Ianthe Jerrold

Deep and Crisp and Even: Michael Gilbert

I shan’t cover every story in the review, but will instead focus on some favourites. The collection itself presents a pleasant variety with private citizens, an unpaid PI, and a few policemen in the mix. While there’s a range of stories, I found myself really enjoying the blend of voices here. 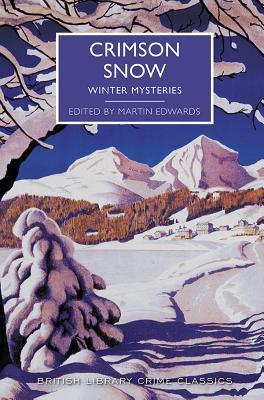 I’ve been meaning to read Fergus Hume’s The Mystery of the Hansom Cab for years, so I was delighted to read his short story, The Ghost’s Touch, in which the narrator, Doctor Lascalles is invited by an Australian friend, Frank Ringan to spend Christmas at the “family seat near Christchurch.” Frank, whose father made his fortune in the “gold-digging days”  is the wealthy member of the family, but the “head of the family” is Frank’s cousin impoverished Percy Ringan. Alarm bells ring in the mind of any self-respecting crime reader when we learn that the Ringan cousins have made their wills in each other’s favour.

It was a wonderful old barrack of a place, with broad passages, twisting interminable like the labyrinth of Daedalus; small bedrooms furnished in an old-fashioned manner; and vast reception apartments with polished floors and painted ceilings.

At Ringshaw Grange, however, things begin to go wrong when there’s an unexplained fire in Frank’s bedroom and he’s moved to the notorious haunted chamber, the Blue Room. …

Edgar Wallace’s The Chopham Affair was another pleasant surprise. In the introduction, Martin Edwards states that while “subtlety was not” Wallace’s strongest point, “his short stories have arguably stood the test of time.”  The Chopham Affair, a story of blackmail and murder, was excellent, and this is how it begins:

Lawyers who write books are not, as a rule, popular with their confrères, but Archibald Lenton, the most brilliant of prosecuting attorneys, was an exception.

Off the Tiles from Ianthe Jerrold is a short story with a twist as it ends not so much with a solution (which does occur) as with an observation on the unwavering consistency of human behaviour. The story is an investigation into the death of a woman who appears to have fallen off of her roof. Hostilities exist between the dead woman and her neighbours and the dead woman’s sister insists that murder has occurred.

The Man with the Sack from Margery Allingham was a delight. It’s a story in which we find poor Albert Campion roped into being an unpaid PI during a Christmas gathering which takes place at the home of some old friends. In The Santa Claus Club from Julian Symons, private investigator Francis Quarles is employed by the wealthy Lord Acrise who has been receiving threatening letters from a man who went to prison decades earlier. Christopher Bush’s Murder at Christmas is the story of a golfing holiday interrupted, most inconveniently, by a murder. Victor Gunn’s amusing Death in December features Chief Inspector Bill ‘Ironsides’ Cromwell who investigates a murder that takes place during the holidays at a castle. A dead body pops up and then everyone finds themselves snowed in….

“A fine place to bring me to for Christmas,” he said sourly. “Ghosts all over the place before we even get indoors!”

Crimson Snow, and what a apt title that is, is a most enjoyable read for the season.