I bought a copy of Aldous Huxley’s The Gioconda Smile some years ago, and it’s taken me this long to get to it. It’s brief: my copy of oversized print runs to 42 pages, so it’s a short story. This is the tale of married man, Mr Hutton, who fancies himself as dashing and handsome. The story opens with Mr Hutton visiting “poor” Janet Spence. She’s the one with the Gioconda smile, and all I could think of was that old song, ‘Mona Lisa.’

If there’s a mirror in a room, that’s where you will find Mr. Hutton admiring himself whenever he gets the chance. There’s “no sign of baldness ” yet  “only a certain elevation of the brow,” which Hutton thinks is “Shakespearean.” Hutton has money, an invalid wife, a perky, doting lower-class mistress, and yet, he still finds the time and energy to visit Janet Spence. Hutton never knows what to make of Janet. She’s so calm and self-contained–not like the other women in his life.

Hutton, like most womanizers, liberally drops hints about his unhappy married life (he sounds a lot like Grant in Christina Stead’s A Little Tea, a Little Chat):

Reality doesn’t always come up to the ideal, you know. But that doesn’t make me believe any less in the ideal. Indeed, I do believe in it passionately the ideal of a matrimony between two people in perfect accord, I think it’s realisable. I’m sure it is.

He paused significantly and looked at her with an arch expression.

Poor Hutton… making his unhappiness known. But the next scene shows Hutton rapidly switching gears as he joins his cockney mistress who’s waiting patiently for Hutton in the back of his chauffeur driven car.

The portrayal of Hutton is masterful–even if the story’s denouement is not. Hutton is very much a type, and yet still strongly individualistic. A man who thinks he owns the world, runs the world and yet is still basically clueless.

I’ve read a few Huxley stories/novellas now and enjoyed them all. Brave New World dominates Huxley’s work, and other than that book, he seems to have fallen out of fashion.

Aldous Huxley’s novella After the Fireworks concerns the love affair between a popular author and a young attractive female fan. Two or Three Graces, the second novella in this collection published by Harper Perennial also concerns love affairs–collectively these two novellas explore the nature and reality of love

The tale is told by Wilkes, a bachelor, and begins in Paris. I wasn’t sure where Huxley was leading as he describes two of Wilkes’s problematic relationships. One trying friendship is with the volatile, highly emotional writer Kingham and the second with former public schoolmate the plodding, boring Herbert Comfrey. Kingham, a man who “liked scenes” has an overreactive fit about Herbert and exits the frame, or so we think. 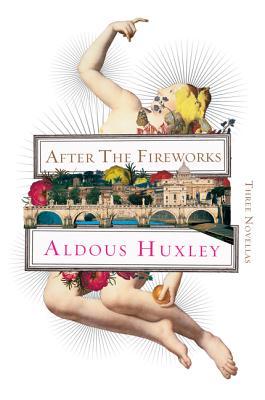 Wilkes returns to England in the company of “passive vegetable clinger” Herbert and lo and behold who do they meet on the Dover quayside but Herbert’s even more boring brother-in-law, solicitor, John Peddley. This man is so boring that he actually haunts railway stations and docks waiting to pounce on a “victim,” some weary traveller who he can then pontificate to at length, while this poor lost soul, too tired to fight, puts up little resistance. Peddley, like a typical bore, just needs an audience; to other people’s “feelings and thoughts he was utterly insensitive. It was this insensitiveness, coupled with his passionate sociability, that gave him his power. He could hunt down his victims and torture them without remorse.”

Peddley was an active bore, the most active, I think, that I ever met; and indefatigable piercer, a relentless stuffer and crammer. He talked incessantly, and his knowledge of uninteresting subjects was really enormous. All that I know of the Swiss banking system, of artificial manures, of the law relating to insurance companies, of pig-breeding, of the ex-sultan of Turkey, of sugar rationing during the war, and a hundred other similar subject , is due to Peddley. He was appalling, really appalling; there is no other word. I know no human being with whom I would less willingly pass an hour.

And yet the man was extremely amiable and full of good qualities. he had a kind heart. He was energetic and efficient. He was even intelligent.

And it’s in a state of weariness that Wilkes succumbs to an invitation to Peddley’s home. Here he meets Peddley’s wife, Herbert’s sister, Grace. She’s a lot like Herbert, but whereas Herbert annoys Wilkes, he’s charmed by Grace. She’s a sort of helpless, vague woman, and Wilkes finds her “graceful ineptitude” quite “enchanting.” After spending some time with the Peddleys, Wilkes concludes that the marriage ‘works’ but that Grace tunes out of her life most of the time.

It’s through Wilkes that Grace is introduced to two successive lovers. Each love affair defines Grace in some way–hence the title. With one lover she becomes a bohemian, and with another, she’s a heartless vampire who sucks the life out of men. At one point, Wilkes even begins to imagine that he’s in love with Grace.

With each of these men, Grace, however, doesn’t fundamentally change. She might dress differently, and she might carry around a cigarette, but she’s still vague, fuzzy at the edges, Grace. The men in her life make her what they want her to be–hence the title. Huxley shows us two different Graces through her love affairs, but he’s not sure if there even is a third Grace. There’s a lot of sympathy for this character who married Peddley when she was too young to know better.

In spite of this novella’s slow start, I loved it. It’s a character study, and Huxley analyses his handful of subjects quite unmercifully, giving them nowhere to hide. But then even Wilkes, our narrator, is sliced up and his faux feelings examined. Also under scrutiny here is the subject of love. Huxley acknowledges its realities but also subtly analyzes its shifting properties.  There’s a definite feeling that Huxley is writing about real people disguised by fiction.

Uncle Spencer is the third, and weakest novella in the book. It’s basically the reminiscences of holidays spent with an idiosyncratic uncle who runs a sugar factory in Belgium. These holidays are interrupted by WWI, and Uncle Spencer’s arrest and imprisonment.

After the Fireworks: Three Novellas by Aldous Huxley

“Ostrichism–it’s the only rational philosophy of conduct.”

In Aldous Huxley’s novella, After the Fireworks, fifty-year-old bachelor, author Miles Fanning is in Rome for his annual stay in Rome with his “oldest friend,” Colin Judd, a man Fanning confesses that he doesn’t like, but still a man who is an asset. It’s through Fanning’s relationship with Judd that we first get a glimpse at this famous author’s character, and it’s not a particularly flattering portrait. Fanning uses Judd for his house in Rome, and because of the free accommodations, he’s willing to let the possessive Judd fuss over him.

Most of Judd’s competition is in the form of Fanning’s female fans, and Fanning, knowing this, has the habit of teasing Judd, provoking his friend’s jealousy.

He was having his revenge. Nothing upset poor Colin Judd so much as having to listen to talk about women or love. He had a horror of  anything connected with the act, the mere thought, of sex.

Fanning has received a letter from a twenty-one-year-old fan, Pamela Tarn, who just happens to arrive in Rome. Fanning, who sometimes has affairs with his women fans, knows that Pamela is too young for him, and he knows that he shouldn’t take advantage of her youth or the fact that she worships him. Fanning is happy to flirt with Pamela as she’s an attractive girl with “impertinent little breasts,” and after all, it’s very flattering to have a young, beautiful girl hanging on his every word:

There was even something quite agreeable in resisting temptation; it had the charms of a strenuous and difficult sport. Like mountain climbing.

He mentions Pamela to an old, female friend, Dodo, a woman he contemplated having an affair with years earlier. She knew Pamela’s mother Clare, and according to Dodo, Clare, a mediocre woman, was a fantasist when it came to her GPs (grand passions) and so-called Caprices. It seems likely that Pamela, “vamping by correspondence,” may be a lot like her mother–a born groupie.

What she’s seen of the world she’s seen in her mother’s company. The worst guide imaginable, to judge from the child’s account. (Dead now, incidentally.) The sort of woman who could never live on top gear, so to speak-only at one or two imaginative removes from the facts. So that, in her company, what was nominally real life became actually just literature. Bad, inadequate Balzac in flesh and blood instead of genuine, good Balzac out of a set of nice green volumes

After the Fireworks is an interesting tale for its exploration of an author’s relationship with a particularly persistent fan. Fanning enjoys the attention from attractive female fans, and yet also cringes at the thought that anyone ‘understands’ him. He’s well aware that women read his books, identify with the heroines, and imagine that their lives are part of some sort of epic romance (sometimes with him in the picture). It’s a phenomenon known as “Miles Fanningism”

The plot contains some chapters with Pamela writing, rather immature observations about Fanning, in her diary, while inadvertently revealing her youth, inexperience, and unrealistic worship. After the Fireworks has a literal and figurative meaning with Fanning arguing, logically, in one particularly strong passage, why they shouldn’t engage in a love affair, but the problem is that Pamela won’t take no for an answer…

This could have been written as a tragedy (Anna Karenina is mentioned) but instead this is an excellent novella about human folly. Just because we know we shouldn’t do something, doesn’t mean that we will behave sensibly. The story had a Jamesion feel to it, and no doubt the location accentuated the connection.

This is one of three novellas published in a single volume. The others are Two or Three Graces and Uncle Spencer. I thoroughly enjoyed this tale and was pleasantly surprised by Huxley. Isn’t that a great cover?