The Unhappiness of Being a Single Man: Kafka

Kafka’s The Unhappiness of Being a Single Man includes a stellar introduction from translator Alexander Starritt. I have respect for intros from translators; after all they are the ones who slaved over the words, mulling over one choice over another, so if anyone ‘deserves’ to write an intro, it’s the translator IMO. Starritt’s intro is lively, fluid, and well … interesting:

In English, the word that usually follows ‘Kafkaesque’ is ‘nightmare’. Hardly the thing to make you think, ‘Hurray, a new translation. No Netflix for me tonight.’ And in truth, Kafka’s work is more respected than it is loved.

These first sentences hit a chord with me. I have lost count of the number of times The Metamorphosis popped up again and again in literature class after literature class. Yes the story (while I liked it) became a ‘No-Exit’-Not-Again nightmare in itself. 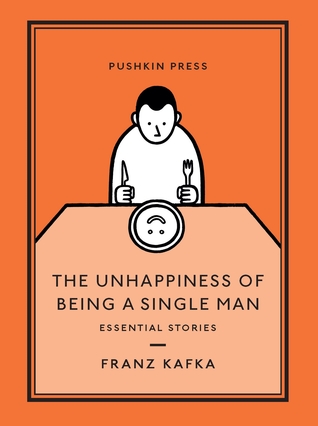 Starritt argues that these short stories present an entirely different view of Kafka, and I agree. These stories are mercurial, some are absurdist, and the closest thing I could compare to is absurdist Russian fiction. These stories (and some are extremely short) are not at all what I expected from Kafka. Some stories are flash fiction–if we could imagine such a term applying to Kafka. Other stories are longer, and of course, as is with all collections, some stories are stronger than others.

The title story: The Unhappiness of Being a Single Man is a good idea of what to expect here. I read it on my kindle and it’s just over a page long. This is a single man who rues the things he’s missing:

It seems a terrible thing to stay single for good, to become an old man who, if he wants to spend the evening with other people, has to stand on his dignity and ask someone for an invitation

The last lines were unexpected and made me chuckle. Again–not at all what I expected from Kafka.

In The Married Couple, a sales rep takes his sample case to a man known as N. The sales rep and N used to work together, but now N, a much older man is bed-bound and possibly close to death. Yes, perhaps this sounds like the sort of thing we’d expect from Kafka, but the final delivery is not.

A First Heartache is a short tale of a trapeze artist who in the quest to perfect his art becomes increasingly isolated. The abnormal becomes normal and he clings to his life on the highwire. He:

had arranged his life in such a way that, initially out of a striving for perfection, then out of increasingly tyrannical habit, he stayed on his trapeze day and night for as long as an engagement lasted. His modest needs were catered to by a rota of attendants who were posted below and hauled everything up and down in specially made containers.

The trapeze artist is “in constant training, of keeping his art at its peak.” This becomes a way of life, this increasing isolation, and the only thing that disrupts this routine are the unavoidable transfers from venue to venue, which badly disrupted his peace of mind.”

Another top pick has to be In the Penal Colony, a story of a researcher who travels to a penal colony only to be invited to attend the execution of a soldier “who’d been sentenced to death for disobeying and insulting a superior officer.” The story centres on the machine that will do the deed. It’s a diabolical contraption designed by the former (deceased) commandant. The machine is sadistically designed to inflict maximum pain and suffering over a twelve hour period before the final coup de grâce.

While the officer explains the machine’s processes of torture “with great zeal,” the condemned man, who has no idea of the fate that awaits him is at first disinterested (the officer and the researcher speak in French) but then he becomes increasingly curious as the machine’s mechanisms are explained:

The condemned man looked as submissive as a dog, as if they could have let him wander around the slopes on his own, and would only have needed to whistle for him when they wanted to start the execution.

The officer’s matter-of-fact approach to explaining the machine is, of course, bizarre and yet entirely believable. This method of execution has become an institution in the penal colony, but now it has fallen out of favour. The condemned soldier has not been given a trial and is unaware that he has even been sentenced to death. According to the officer, “it would be pointless to tell him.” Torture and death as spectacle: what is there about these things that appeal to people? The matter-of-fact bureaucratic manner in which the sadistic death is explained moves the execution away from the idea of suffering and into efficiency. Couldn’t help but think of the Nazis.

This collection rolls in at just under 200 pages. I think the stories are best read one at a time, rather than in chunks.