The Gate by Natsume Soseki

“He happened to glance up beyond the eaves and noticed the bamboo leaves gathered densely atop the bamboo stalks, like the stubble on a monk’s close-cropped head. As the leaves luxuriated in the autumn sunlight they drooped down heavily in silent clusters, not a single one stirring.”

When Tony announced Japanese Literature reading month, January in Japan, I decided to join in. I think I’ve read one Japanese novel in my lifetime, which, when I thought about it started to feel pathetic. So now I’ve read two. And even though that now with one move I’ve doubled my Japanese reading bank, somehow it doesn’t feel as though I’ve made much of a leap. My unfamiliarity with Japanese literature came back to haunt me on just about every page of my chosen book, The Gate by Natsume Soseki: the history, the customs, the terms, but one thing was constant. Yes, the universality of bad human behavior. Hey, I’ve read Balzac; I know when people are being bad. 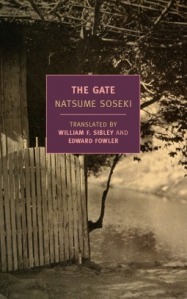 The Gate written by Natsume Soseki (1867-1916) is a very simple story, and it’s beautifully written with a very calm style that matches the novel’s content. Published in 1910, The Gate is the story of Sosuke and his wife Oyone, a Tokyo couple who live in modest circumstances. Sosuke and Oyone are childless, and we’re not far into the novel when we learn that Sosuke must assume care of his younger brother, Koroku. While a great deal of the novel is spent on the day-to-day routines of life, underneath the calm conversations, there’s a matter of contention between Sosuke and his aunt. Sosuke’s father died leaving a house, his possessions, and some antiques. Since Sosuke was not living in Tokyo at the time, he turned over all financial matters to his uncle–a man known for his financial fecklessness….

The very helpful introduction from Pico Iyer goes a long way in explaining Japanese customs. For example, “the individual’s job in public Japan is to keep his private concerns and feelings to himself and to present a surface that gives little away.” It’s all about “conflict avoidance,” and we see that repeatedly in the novel. With my western sensibility, I’ll admit to a certain frustration to this approach. I couldn’t understand why on earth, anyone in their right mind would turn over any financial responsibilities to an uncle who has a history of business disasters, and then I also felt frustration about Sosuke’s failure to confront his relatives about his remaining inheritance. I kept hoping that Sosuke would go over to his aunt and uncle’s house and kick some bottoms.  But Sosuke is a study in avoidance, and apparently his skill at adroitly finding excuses not to confront his relatives even annoys his brother:

Koroku was privately of the opinion that all this dithering stemmed from an inborn flaw in his brother’s character.

Poor Koruku. He depends on the inheritance if he wants to attend university. So with that quote in mind, while I know that Japanese life is all about “conflict avoidance” it would seem that Sosuke has taken this to  whole new level: subject avoidance.

The issue of a missing or misspent inheritance is not the only incident that troubles the tranquility of Sosuke and Oyone’s life. There’s also a robbery committed against their landlord–a remote figure at first who turns out to be a very colourful character, an antique screen that may or may not be valuable, and there’s also an ex-husband who may awkwardly reappear. But all of these issues are mere ripples on the surface of life–no drama, no hysteria, no arguments or fights, and instead the emphasis is on the daily routine, trips to the bathhouse  accompanied by Sunday liberation. I loved these scenes of Tokyo life that show Sosuke spends his Sundays as he tries to pack in so much into just a few precious hours of freedom:

Realizing that both this Sunday and the fine weather that accompanied it had drawn to a close, a certain mood came over him: a sense that such things did not last for long, and that this was a great pity. From tomorrow he would again, as always, be busy at work–the thought brought on pangs of regret for the good life he had tasted for this one afternoon. The mindless activity that filled the other six days of the week seemed utterly dreary. Even now, as he walked along, he could see before his eyes nothing but the outlines of the large but windowless office that the sun scarcely penetrated, the faces of his colleagues sitting beside him, the figure of his superior summoning him with a “nonaka-san, over here, please….”

We see the sights and colours of the city through Sosuke’s eyes, and there’s a sense of wonderment marred by the realities of economics and a rather pleasant lack of materialism:

That time in his life when he could not pass a bookstore without wanting to go in, and once inside to buy something, now belonged to the distant past. True, one English-language volume in the center of the window with a particularly fine binding and entitles History of Gambling fairly leaped out at him with its disctinctiveness, but that was all. Smiling to himself, he hurried across the street, where he stopped for a second time, to peek inside a watchmaker’s. On display were numerous gold watches, watch chains, and the like, which again he regarded as so many pretty-coloured, well-formed objects without the slightest desire to make any purchase. Nevertheless, he examined all the price tags dangling there from silk threads, comparing this item and that, and came away surprised at how cheap the gold watches were.

The introduction makes the point that this author’s protagonists are the “masters of doing nothing at all. They abhor action and decision as scrupulously as Bartleby the Scrivener.” This is definitely true of Sosuke–a man who finds that he may have to face a past that he’s studiously avoided. Translated by William F Sibley.

Finally a question for readers and Tony: can anyone recommend any Japanese CRIME novels?