Henri Bosco’s moody novel Malicroix, set in the nineteenth century, drops the reader right into the plot when the narrator, a 25-year-old man receives a letter informing him that he has been “left an inheritance: some marshland, a few livestock, a tumbled down house. ” So a modest legacy, but, Mégremut an orphan raised by his father’s relatives, is intrigued. The property was owned by his reclusive uncle, Cornélius de Malicroix, the Marquis de Malicroix. The young man’s father’s relatives, the “gentle and patient Mégremuts,” don’t want him to go, but he is drawn to the situation, partly by curiosity and partly by some aspect of his nature.

I felt myself to be a Mégremut when I was among them, for their gentleness is quite infectious. But, left to myself, I rebecame a Malicroix, with a sort of secret drunkenness and a strange fear. For this Malicroix, unknown to all, hidden within the blackest part of myself, seemed more alive than all the Mégremuts who inhabited me with ease.

Cornélius de Malicroix’s notaire, a man called Maître Dromiols sends an “itinerary” and so Mégremut sets off to meet a coach at an “old signpost at the intersection of two poor tracks.” The scene reminded of Great Expectations when Pip meets the convict, Abel Magwitch. Not that the scenes are the same, but nonetheless, the bleakness and the loneliness of the landscape form a visual and emotional connection between the two books. 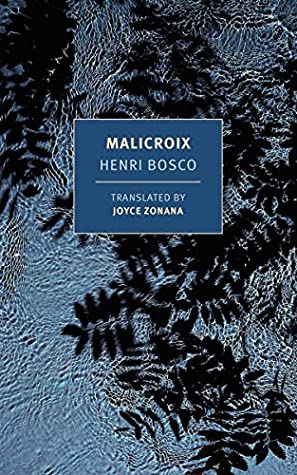 By this point, the novel gains Gothic dimensions which continue as Mégremut travels to an island. There on the island, he takes up residence in his late uncle’s home, a house in which “everything was so clearly reduced to the soberest utility.” The house comes equipped with a laconic servant named Balandran and a large Briard, Bréquillet. Eventually Maître Dromiols, an unpleasant man, arrives accompanied by his strange, much abused servant, Uncle Rat. Dromiols then reads the terms of the will: Mégremut must stay in the house for three months. If this term is completed, then he will be given a letter with instructions for a “mission.” It’s all very mysterious and all very cryptic.

It’s daunting to imagine living in this bleak area for three months, and initially Mégremut has no intention of doing so, but he gets the feeling that Dromiols wants him to fail. Mégremut, curious to discover why his uncle chose to live his life in this bleak place, decides to remain and discover the mystery at the heart of this Gothic novel of revenge and long standing blood feuds.

The novel, a slow, dense, rich read focuses on nature. There are some gorgeous descriptions here. The island is not a particularly habitable place–and that’s at the best of times. At worst, the island seems forbidding, dangerous and hostile. Nature is powerful, angry and violent. Which poses more danger for Mégremut? Nature or Man?

In the Camargue, the wind is drunk. It stamps, swirls, loses its head. Nothing can withstand its ravages. A bare land, pale water, and, on the horizon, the white-capped sea, bristling as it arrives from the distance. Everything succumbs to the law of the wind: water, plants, man, beasts.