On the Holloway Road: Andrew Blackman

“The only thing he believed in was chaos, for in chaos he saw the only small chance he had of feeling alive.”

Jack Maertens, would-be writer, sliding into middle age, lives with his patient, supportive mum in north London. Jack is stuck in a rut “trying and failing to finish a long, learned novel packed tight with the obscure literary allusions and authentic multicultural credentials that the publishers loved in those days.” Jack could have stayed spinning on his hamster wheel going nowhere for years or perhaps he would eventually have given up and crept away to find a job. But these things didn’t happen because Jack meet Neil.

Compared to my own sad, shambling existence in the shadows of lie, his was a kaleidoscope. I peeped from behind my mother’s curtains at the world outside and wrote about people like Neil.

Jack meets larger-than-life Neil in a kebab joint; they talk and spend an evening in a hashish tinged pub crawl, but it’s not a one-off. Neil enters Jack’s life and Jack’s “morose brooding […] suddenly gave way to a riotous drunken haze of colour and noise.” Soon Neil leads Jack on a wild road trip, with the two men, significantly, listening to Jack Kerouac’s On the Road while drinking and erratically driving Jack’s old Figaro up to Scotland. Opposites attract, we know that, but there’s a lot more afoot in this relationship. Jack is definitely attracted to Neil for his joie de vivre. Jack, hasn’t done much in the last few years of his life, and now he acknowledges that “Neil was doing enough living for the two of us.” Neil, unemployed, unemployable and a graduate from Feltham Young Offenders Institution takes over Jack’s life. Neil leads and Jack, lost in his failed ambitions, is happy to follow along and sample life Neil-style. Plus perhaps at the bottom of this Jack imagines that he can crawl out of the deep avoidance crevice he lives in, experience life once again, and finish that book.

But then again, perhaps consorting with Neil is just a sub-category of Writer’s Block. 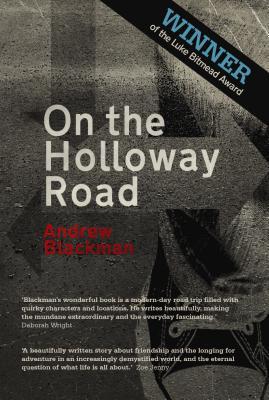 Part-buddy book, part road trip, part examination of the authenticity of rebellion, the desirability of a world totally void of responsibility, and part an examination of the meaning of life, On The Holloway Road, a fairly short book at around 200 pages, follows the trajectory of Jack’s relationship with Neil as Neil enters Jack’s colourless life, takes over and starts igniting, figuratively that is, fireworks. But the fireworks eventually turn to bombs.

Neil is chaos in motion; he can’t remain in one place for long; he needs action, activity. He’s manic and probably if I were a mental health professional, I’d conjure up an ICD-10 code.

Jack’s tolerance for Neil ran farther than mine, but then that’s probably because I knew a ‘Neil.’ That’s not to say that I didn’t love reading about Neil, because I did. These kamikaze people are great fun to read about–but not so much fun when they start buggering up your life.  Jack’s patience runs out with Neil yet he’s still in Neil’s tail wind: first as a participant, then a spectator.

Neil stood up abruptly and went over to a young suited man who was talking particularly aggressively into his phone about meetings and sales targets. He leaned over his shoulder and mimicking a female voice, said, “Come back to bed, big boy. I want you so bad it hurts.”

The poor man covered his phone too late, grabbed his bag and ran away from Neil pouring pleading explanations into the phone as he went. That kept us entertained for a time, but Neil, I now became aware, was like a child who tires quickly of every diversion. In the drunken, loud mobs of life in the pubs of Holloway Road I had never really noticed it, but sitting there in the sober neon glare of the morning, with my brain tired and sluggish, and nothing but the inside of a service station to look at, I felt Neil to be a vortex voraciously sucking life out of those around him and still constantly needing more.

I absolutely loved this book; it’s funny yet poignant. The road trip is an adventure, and like all adventures it has its disastrous moments. Neil, much to Jack’s disgust, spews forth cheesy pick up lines that work on very young “giggling girls, barely old enough to be out of school,” intoxicated women, and a desperate lonely, abandoned wife. Jack is attracted to Neil for the way in which Neil appears to be fearless, but actually reckless is more applicable, and recklessness is wearing. There’s one moment when Jack longs for his resilient, non judgmental mother:

I felt an urge to turn around and drive back to London. I could be there by late evening, just in time to get my mother to make me a toasted sandwich before bed.

At first Neil’s behaviour seems refreshing and lots of fun until it continues … relentlessly… to the point of madness. It’s fascinating to see how Jack at first sees Neil as a Liberator (thinking Thomas Berger’s Neighbors) someone who has all the answers, but then how that gradually slips until Neil becomes this continual train wreck. What does it say about modern life when Neil–someone totally out of control–can appear as though he knows how to ‘live?’ I suppose that’s how cults start.

A Cold Night for Alligators by Nick Crowe

A few weeks ago, I entered a book-give-away contest at Kevin’s blog, and to my astonishment, I won. Of the three books on offer, I grabbed A Cold Night for Alligators by first-time author, Canadian Nick Crowe. Some reviewers compared the book to the work of Carl Hiaasen. I can’t comment on that as I’ve never read any, but I can say that there’s a touch of Christopher Moore  and even Bill Fitzhugh. Chances are that if you like those writers, you’ll enjoy Crowe’s novel. So what is A Cold Night for Alligators? It’s part road trip, part buddy novel, and part mystery. Oh and part innocent Canadian abroad.

The novel’s narrator is Jasper, a twenty-six-year-old man who lives and fights with his girlfriend Kim in the house that used to belong to his parents. Jasper’s father is dead, his mother is in a nursing home, and Jasper’s only brother, Coleman disappeared one night 10 years earlier. Coleman began exhibiting mental problems during his teens and was building a spaceship in the back garden right before he disappeared. Coleman’s disappearance has nagged at Jasper for years as he feels partially responsible.

The novel starts off very strongly with an earnest and believable first person narration from  Jasper as he stands on the subway station on a Friday night waiting to catch the train home while listening to his workmate, Phil moaning about his woes:

It had been another riveting day at the office. I spent most of the day aimlessly searching the internet, reading in turn about Scrotum Smasher, a punk rock band from Northern Ontario who released one classic record in 1986 then promptly disbanded, and Creutzfeldt-Jakob disease, an affliction caused by a slow-moving virus that destroys memory.

Ok, so we’ve established that Jasper is a slacker, and for that, I liked this open-minded, kind character very much. While Jasper listens with one ear, he’s thinking about his upcoming weekend and the inevitable arguments he’ll have with his long-term girlfriend, Kim. But those arguments never happen. Fate intervenes in the form of a loony and when Jasper wakes up from a coma 7 months later his life has changed. Not only is he horribly injured but his girlfriend has moved on and now lives with her new man, Donny …  in Jasper’s house.

Jasper, is a little uncomfortable (nothing more) with his girlfriend finding a new man while he’s in a coma. That, of course, would be bad enough, but that girlfriend ex “party-girl extraordinaire” now  “God-botherer” has moved her new man into Jasper’s parents’ home. She seems to be pushing the envelope of decent behaviour, and this also creates a very awkward situation when Jasper comes out of the coma. Again, Jasper seems to roll with it–it’s just not in his nature to hold a grudge or be angry. For these reasons, Jasper’s character is a little too good at times ( he notes that Donny “was being pretty good about the whole thing” and that illustrates how Jasper misses the point at several times throughout the story), but that seems to be the author’s intention.

Jasper has problems adjusting back to his life, but two things happen: he receives a phone call on his birthday from the Fort Myers area of Florida, and while no one speaks on the other end, Jasper is convinced the anonymous caller is his long-lost brother Coleman. Jasper and Coleman spent many childhood summers in Florida, and both boys grew up with a “lifelong love of the Sunshine State.” But then there’s a second phone call–this time from a Florida sheriff who says that a homeless man gave him this number. Jasper is first intrigued and then takes a fishing trip down to Florida with Donny and his hapless, burping friend, Duane (read: shit magnet) to see if he can trace Coleman.

The road trip is peppered with bizarre characters, but that’s nothing to what awaits them in Florida. Here’s Jasper arriving at Aunt Val’s isolated ramshackle place which she shares with Rolly Lee–former front man for the Fort Myers band General Gator:

When we pulled in at the edge of the open area and parked the truck, I noticed a group of men behind the barn. An overweight man with a massively distended bare stomach and matchstick legs was throwing beer bottles while a rough, smoke-smeared artillery of men were taking aim and firing with slingshots and pellet guns. As we got out of the truck, I heard one pop and shatter. There was a chorus of whoops and cheers. I made a mental note that if I had to go looking for an extra truck part, not to do it barefoot.

“Jesus Christ,”  Duane said, “your uncle in a fucking militia or something? This is like Waco.”

Donny nodded. His mouth agape. “He really knows how to throw a cookout. There must be sixty people here.” Another ATV blazed into sight from the mud road and did a donut. Two men got off, beers already uncapped.

“Go man go,” Duane shouted. They nodded in our direction and spat as they went past.

A Cold Night for Alligators could be an incredibly dark novel if it were written from a different angle. But with Crowe’s gentle humour and quirky characters–all seen through Jasper’s wondering eyes–the novel is instead an amusing, light read. The plot sagged a bit in the middle and I had problems with the naiveté of one character whose name I can’t mention without giving away too much.

Can’t help but wonder how Floridians would see the book, but from my perspective, Crowe captured swamp culture perfectly.  It’s a world of its own. Try going off the beaten track in Florida (I’m not talking about the tourist traps) and see what you find. I’ve seen Water Moccasins ribboning through brackish water, alligators deceptively lazy at the side of the swamp, and on one dark starless night I walked through a field while the air was thick with thousands of shimmering fireflies. This geographical region is unique and mysterious. It’s one of the areas that leaves an imprint on the people who live there, and Nick Crowe captured my memories of the place perfectly.