“You just collect religious souvenirs to use as murder weapons, is it?”

The Glorious Heresies, a debut novel from Irish author Lisa McInerney portrays a handful of lives immersed in crime, drugs, and violence. Over the course of a five-year period, these characters intersect, criss-crossing back and forth over a murder. This is Cork post Celtic Tiger, an Ireland populated by characters whose troubled lives rankle with conscience for past deeds and current acts, and yet turning to the church or family brings no answers. 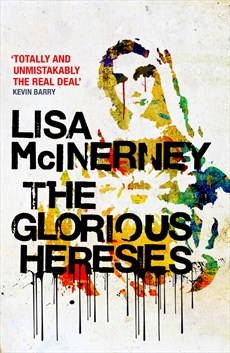 The book has a bit of a dodgy opening with fifteen year old Ryan about to have sex with his girlfriend Karine for the first time. Ryan, already a very successful drug dealer, initially feels that he has few choices in life, and as the plot continues he becomes arguably the most interesting character in novel. Ryan’s boss, a man with “an arctic disposition punctuated by explosions of lurid temper,” treats the boy like a “pet.” Ryan lives with his violent, abusive, alcoholic father, Tony Cusack whose “charming laziness […] had morphed into dusty apathy.” Cusack is a pitiful creature whose Italian wife died in a car accident some years earlier leaving Tony to raise their six children on his own. Tony who hits the bottle and Ryan regularly, isn’t doing at all well with this monumental responsibility. It’s hardly a happy home:

Tony Cusack’s terrace was only one of dozens flung out in a lattice of reluctant socialism. There was always some brat lighting bonfires on the green, or a lout with a belly out to next Friday being drunkenly ejected from his home (with a measure of screaming fishwife thrown in for good luck), or squad cars or teenage squeals or gibbering dogs.

Then there’s Georgie, a drug-addicted prostitute who tries to find religion but runs foul of crime boss Jimmy Phelan. Meanwhile tough guy Phelan may terrify everyone else in Cork, but his mother Maureen is the bane of his existence.

The book has a strong emphasis on fractured familial relationships (Ryan and his father, Jimmy and his mother, Maureen), and we see how family structure has failed these characters, and how that old reliable fall back, religion, seems impotent in today’s Ireland.

McInerney argues that her characters, running foul of various vices, pressured by economic realities, are still capable of making moral choices, even though they think otherwise. At one point in the novel, a maturer Ryan argues that “there’s always a choice,” and while at one point in Ryan’s life, he abdicated from the notion of personal responsibility, ultimately he must make a stand.

Although the writing spits with raucous life through, the novel’s plot sagged a little after the halfway point. There’s one scene in which Jimmy’s mother Maureen, angry that she was forced to give up her baby years ago, takes on a priest, and her long speech (extract here) seems forced and not up to the author’s very natural style:

I might have died in your asylums, me with my smart mouth. I killed one man but you would have killed me in the name of your god, wouldn’t you? How many did you kill? How many lives did you destroy with your morality and your Seal of Confession and your lies.

It’s hard not to love McInerney’s troubled, flawed, vice addled characters, and it’s harder still not to hope that they will manage to turn their lives around before the last page. There’s a character here, shit-stirrer Tara Duane, whose malicious meanness separates her from the rest of the troubled, wounded cast.

The bitch had always maintained she didn’t have a bob to her name but with only one kid and a frame that suggested she only ate on Thursdays, it was obvious she was hawking the poor mouth.

McInerney’s writing and characterization seem so well-assured, it’s hard to believe that this is her first novel, and in spite of the novel’s flaws, I loved the writing style. I hope we see a second book soon.

Not for herself. You don’t just kill someone and get forgiven; they’d hang you for a lot less. No, she was seeking redemption like a pig sniffs for truffles: rooting it out, turning it over, mad for the taste of it, resigned to giving it up.

Thanks to Gert for pointing me in the direction of this book in the first place.

I arrived at Esther Freud’s novel, Peerless Flats after reading and throughly enjoying one of this author’s short stories. I am drawn to short story collections with multiple authors as a way of ‘trying’ out new names. A novel by Freud, Hideous Kinky, was made into a film. I wasn’t crazy about the film, but I was interested to try a novel. Peerless Flats should be, according to traditional literary conventions, a bildungsroman–a coming-of-age novel in which we see the moral, social and psychological maturation of the main character. But none of these things take place for sixteen-year-old Lisa in spite of the fact that she is faced with decisions about sex, drugs, loyalty & responsibility. As a result, the novel seems to say a great deal more about the shapeless void of modern society and the shameless lack of parenting than anything else.

Peerless Flats, and what a cruel name that really is, is the name given to a block of bleak, slum flats in London. It’s here our heroine, Lisa, homeless, lands with her somewhat feckless mother, Marguerite and younger half-brother, Max. They’ve been “dogsitting” for an acquaintance, but now that this person is returning from America, Lisa, Max and Marguerite have n0where to stay. The flat is supposed to be temporary, but it soon looks as though Lisa and her family will be stuck there for some time.

As the novel continues, it becomes clear that this state of affairs is just the latest episode of impermanence in sixteen-year-old Lisa’s life. Her mother could probably be described as a sort of feckless hippie. They’ve spent the last 7 years living with Swan Henderson, the man who fathered Max, but Swan has moved on to a younger woman, and is planning a “round-the-world sailing trip with a Dutch nursery school teacher named Trudi.” As a result of the break up of Lisa’s mother with Swan,  Lisa, Max and Marguerite have moved to London. The prospect of landing in London with nowhere to live and with two children to care for doesn’t particularly worry Marguerite. She tells Lisa, “Something is bound to turn up.”

The flat, and it’s a lifesaver when they get the key, is an abysmally depressing place with “rubbish thrown from the windows above by people too lazy to use a dustbin”:

The man stooped on the fourth floor and unlocked a door, and for a moment they all stood crowded together in the tiny hall of the flat. The council man showed them wordlessly around. he pushed a door open into the sitting-room. It was oblong and empty, with wooden floorboards and a window with small panes that cut the tower block opposite into squares. There was a bathroom  and a narrow kitchen with flowers in orange, brown and yellow in the wallpaper all linked together with hairy green stalks. Max covered his eyes when he saw them. At the end of the kitchen was a toilet in a little room that hung out over the edge of the building.

With no bedrooms and very little money, the mother and two children basically camp out in the flat.

Lisa has a sister, Ruby, a girl who possesses a sort of reckless glamour. She lives with a thug named Jimmy Bright, now sports an East Ender accent and is experimenting with heroin:

Ruby was meant to be in London on a History of Art course. By the end of the first term she had already dropped out and was working in a shop that sold bondage trousers and plastic shorts and shirts with one sleeve longer than the other. People were whispering that Ruby was on drugs. That she was having an affair with a Sex Pistol. That is was a sacrilege to cut off that beautiful waist-length hair. Lisa felt immeasurably proud.

Just as Max’s father Swan feels ok with taking a round-the-world boat trip and forgetting he has a son, similarly Lisa and Ruby’s mostly disinterested father floats somewhere off in the background. He’s not really part of their lives, but he’s happy enough to show up occasionally to buy the odd meal out. He’s a shady character whose exact employment remains vague. Ruby is clearly their father’s favourite, and there’s no attempt to pretend otherwise.

Peerless Flats is not a particularly shaped novel and it mirrors the drifting nature of Lisa’s life. While Lisa attends drama school, the novel takes an impressionistic approach by not examining Lisa’s day-to-day life. The story covers a period of time in Lisa’s troubled life as she drifts in and out of various situations and relationships. On one hand she becomes obsessed with the idea that someone will spike either her food or drink with drugs, and yet at the same time, she experiments with drugs. She strikes up unformed relationships with two young men–Tom, who really fancies the much more glamorous and self-destructive Ruby, and Quentin, a twenty-five-year-old “down-on-his-luck drug dealer” who pressures Lisa into giving him a windfall bag of pot. Lisa drifts into various situations that expose her vulnerability while she partially longs to be more like Ruby and secretly wishes for a more permanent home.

Peerless Flats is predominantly a very sad story. Here’s this sixteen-year-old girl who has no ‘adults’ in her life. She’s responsible for herself, and just one look at Ruby tells us what a disaster this can turn out to be. Every day Lisa walks a tightrope. Danger seems to surround her–from the nights she walks alone in the dark streets to the errand she’s sent on to acquire Heroin.

The characters are mostly well-drawn–although the adults are definitely blurry; I suspect this is a deliberate decision. I particularly loved the doom-ridden Ruby and her attempts at drug rehab, but at the same time Lisa is the more substantial sister. Here’s Lisa visiting Ruby in one of her several hospital stays:

She found Ruby sitting on a bench in the garden. She was as yellow as ever and seemed to have made some friends. She introduced Lias to two girls. Marlene, who was West Indian and not yellow but a greenish colour, and a girl called Trish, who was so thin and fragile Lisa wondered that she was able to sit up unaided.

‘It’s brilliant in here,’ Ruby beamed, ‘you can get all the gear you want.’

Lisa’s face fell. She had Ruby’s packet of heroin all ready to present to her.

‘You just place an order with Trish’s boyfriend and next visiting hour it arrives with the grapes.’

‘Yeah, Marlene winked, ‘we don’t half save a lot on syringes.’ And the three girls erupted into a fit of giggles. Lisa smiled weakly. She still had a stitch from the last sprint from the station. When they recovered, Trish and Marlene went off to raid the kitchens. ‘There’s a whole freezer full of raspberry ripple.’