For German Literature Month 2014 one of my selections (on a tip from Caroline) was Jan Costin Wagner’s fantastic crime novel Silence. There’s a film made of Silence btw, so if you’re not into reading crime, but you like watching crime, then the film comes highly recommended. Author Jan Costin Wagner is German and lives in both Germany and Finland with his Finnish wife. His crime series featuring detective Kemmo Joentaa is set in Finland but written in German. Since I enjoyed Silence so much, I decided to go back to the first book in the series: Ice Moon.

Ice Moon begins with the death of Joentaa’s wife from Hodgkin’s disease, and the book, a police procedural, follows two narrative arcs–the actions of a seemingly innocuous young man who is a serial killer, and the actions of Joentaa who’s hot on the killer’s trail. Sections in the chapters jump back and forth between focus, and sometimes, for a few sentences of this third person narrative, it’s impossible to clarify whose mind we are in: the killer’s or Joentaa’s. While I disliked the confusion, it’s a technique which reinforces the similarities between the killer and the man who is trying to capture him. The similarities are mindset connections and are also ways in which Joentaa understands the killer’s motivations. When the first body turns up–a woman killed in her bed, Joentaa’s short-tempered boss, Ketola, suspects the culprit is either a lover or a burglar. Joentaa is convinced that the murder isn’t random, and when a second corpse is discovered, Joentaa is certain they have a serial killer on their hands–Ketola thinks the two crimes are unrelated.

Joentaa’s wife, Sanna, dies on page one, but she appears throughout the book in her husband’s fluid memories. Joentaa, obviously, is severely depressed, and Ketola thinks Joentaa has no business returning to work. Work, however, for Joentaa, is a welcome distraction, and the business of death helps Joentaa connect to the killer’s mind. The killer is a very creepy human being, and because he seems so harmless, he’s also very dangerous.

We get a good look at a very troubled Ketola, that “model of self-discipline,” who’s retired in Silence, and frankly he’s the best character in the book.

Joentaa had always respected Ketola but never liked him. For a time he’d even considered putting in for a transfer, but Sanna had dissuaded him. His addiction to harmonious relations was almost unbearable, she said with a wry smile, but she couldn’t believe that anyone who had fought so hard to get into the CID would throw in the towel after a few harsh words from his boss. Although annoyed with her, Joentaa had known she was right.

Structurally the novel’s premise is problematic for the first in a series. Readers have no emotional investment in either Sanna or Joentaa, so we can’t really mourn along side of our main character. Sanna is dead on page one, and the mourning, the loss, the depression carries on throughout the novel. Sanna’s parents, deep in denial about their daughter’s health (aided and abetted by Joentaa’s poor communication with his in-laws), seem to be more stock characters than human beings. For this reader, killing off the spouse of a main character immediately on page one of the first book seems dicey. I’m thinking of Ruth Rendell’s Inspector Wexford novels. Wexford’s sidekick, Mike Burden’s wife became ill and subsequently died well into the series. The news is broken gradually to the reader and the emotional investment in the characters, already well established, continued throughout the books.

I’m not an author; I’m a reader, and I found this novel problematic and rather depressing. When Ketola tells Joentaa he should stay home, I agreed. Joentaa is a mess. Sanna’s death overwhelms the crime section of the novel, and yet since these are new characters, it was impossible for this reader to catch the appropriate wave of concern. Ice Moon did not come close to the excellence of Silence. If I’d read Ice Moon first, I doubt I would have bothered with the rest of the series. The first book is often the weakest, often almost a throwaway when it comes to jumpstarting a series. Ice Moon sets up its series parameters: Joentaa is a lonely man, a widower who is committed to the region and to solving crime, but I found it hard to whip up much enthusiasm for the main character. The quality of Silence convinces me to continue the series in spite of being disappointed in this novel.

I am delighted that Lizzy and Caroline decided to host yet another German Literature Month—a blogging event I looked forward to all year, but even though I’ve had a year (since GLM 2013) to select books, I found myself with no concrete plans except the promise to read some Joseph Roth. Then a few weeks ago, Caroline, in a lead-up to the month, made a post with a few book suggestions. There was a name on the list… Jan Costin Wagner, a German writer of crime novels set in Finland….

I ordered Silence, and when the book arrived the cover was different from the one expected. Not a big deal, but the cover of my edition is the film tie-in version, and guess what, I’d seen the film which was excellent btw. I’d seen the film a few years ago, but it was one of those films you’d don’t forget, and the plot didn’t disappear into the ether the minute I turned off the DVD player. So my main concern, after seeing the film version, was that I’d feel a total lack of suspense when reading Silence.

Set in the small Finnish town of Turku, the novel focuses on the disappearance of a young girl who simply vanishes one summer day while on her way to volleyball practice. The thought that a human being can vanish without a trace is eerie, but in this case, it seems that history has repeated itself. The missing girl’s bicycle is found in a field right next to a makeshift shrine to yet another young girl who vanished from the same spot 33 years earlier. It’s impossible to not connect the two crimes. The first girl, raped and murdered, was eventually found in a remote lake, and of course, the police and the community fear that a similar fate awaits the second girl. Is the same killer, possibly now geriatric, responsible for the fate of the two girls? Or is this a copy-cat crime? 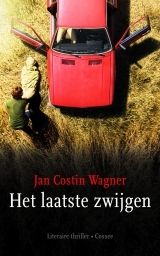 Silence begins back in 1974 and within a few pages we know exactly who the killer is. The suspense, and there’s a lot of it, is generated by the unknown fate of the second girl, 33 years later, and whether or not the police will solve the two crimes. Interestingly the film diverged from the book in several ways. The plot is still recognizable, but the film includes some bold differences. The film is a much more traditional investigation, with an emphasis on the visual (some of the more painful details not flushed out in the book), and the book’s cover indicates one of the crucial clues missed in the first investigation and not touched on at all in the book. The book is quite different (you’ll see why if you watch the film too),  and the inner lives of the detectives following the case are a main focus. Ketola was a young policeman, new to the force when the first girl, a thirteen year old named Pia was murdered, and even though he retires shortly after the novel begins, he cannot forget the case and even drags a model of the crime scene, made in 1974, back to his home in case staring at it all day will wake up some dormant clue.

Another policeman on the case is Kemmo Joentaa, a widower who lives in a home that’s basically become a shrine to his dead wife, Sanna.  Joentaa sees exactly the same presence of the dead when he goes to question Pia’s mother, Elina. People are surprised that she stayed in the same house, and there’s an unspoken criticism that she chose to do so, but Joentaa understands all too well how hard it is to let go.

The girl in the photograph was laughing. A peal of laughter, thought Joentaa, those were the words that had occurred to him when he saw the picture of the girl. Pia Lehtinen.
Joentaa stood in front of the photograph and felt a tingling sensation at the idea that it had been hanging there for decades. Just as Sanna’s photos would still be in the same place. decades from now.

“That’s Pia,” said Elina Lehtinen, who had come to his side. She was carrying a tray with cups, plates and a blueberry cake still steaming from the oven.

“Of course. You have a photograph in your files,” said Elina Lehtinen.

“It’s incredibly long ago,” she went on, without taking her eyes off the photograph. “I was thinking about that yesterday, and I was surprised to realize that today Pia would be a woman of forty-six. Hard to imagine.” She looked at him and smiled.

Elina Lehtinen’s  daughter was murdered 33 years earlier, but the parents of missing Sinnaka Vehkasalo are enduring the agony of a missing daughter who’s feared murdered. Elina and her husband divorced after the murder of their daughter, and Pia’s father still can’t talk about it. We see Sinnaka’s parents travelling down the same path as they blame each other over various aspects of their daughter’s disappearance. The contrast of these two sets of parents is interesting and subtle. Elina has managed to attain a certain serenity but we know that it was hell getting there.

“Once I really did have a great fit of laughter,” continued Elina Lehtinen and she was laughing again now as she saw Joentaa’s face.

“An extraordinary fit of laughter, it’s my most vivid memory. On the day my husband left me. He said he was going now, and I started laughing and couldn’t stop until that evening, and the next day I rang my neighbour’s doorbell and they took me to a hospital, and I spent  a long time having treatment there. Is the cake alright?”

“My most vivid memory,” she repeated. “Everything else is almost just a  … well, a feeling of everything being over. It’s sometimes close, sometimes further away. You talk to people, that sometimes helped me. And now it’s ages ago, but it’s beginning all over again.”

“You mean the missing girl, Sinikka?”

“Yes. It’s repeating itself. When I saw the police officers I wasn’t surprised. Because I’d always expected it to happen again, somehow. Do you understand?”

Joentaa didn’t answer. He didn’t know whether he understood or not.

“I always knew that couldn’t have been all, because some time everything comes to an end, but this never really did. I’m afraid I can’t explain it better.”

The pain and difficulty of parenthood is evident through the glimpses we have of these distraught parents, but there’s also Ketola who’s coming to terms with the fact that his son is mentally ill. There’s some unfinished business at the end of the book. Ketola is obsessed with Pia’s murder–the case he never managed to solve during his long career, but something also gnaws at the corners of Joentaa’s mind.

The silence of the title refers to the things left unsaid–the thoughts we cannot express to people, the spaces left by the dead, and the silence of waiting for answers. The book’s intriguing premise is more than matched by the characters, and I’m delighted to learn that Joentaa appears in other books from this author.

Thanks for the tip, Caroline.