Diary of a Foreigner in Paris: Curzio Malaparte

“How kind France is when it is noble.”

Malaparte, a play on the name Bonaparte, was a journalist whose real name was Kurt Eric Suckert. Malaparte (1898-1957) initially supported the Italian fascist movement, but later fell foul of the Mussolini regime and was arrested and imprisoned multiple times. Malaparte certainly got around. In The Skin, Curzio Malaparte, as a liaison officer with the American forces, takes a look at the ugliness of Naples in 1942. In The Kremlin Ball, Malaparte is in 1929 Stalinist Russia.

Both The Skin and The Kremlin Ball echo a thought that rolls in frequently: amazing eye witness accounts cannot be exchanged for history books, and then comes a second thought: while all these things happened in incredible times, I’m glad I didn’t live through them. 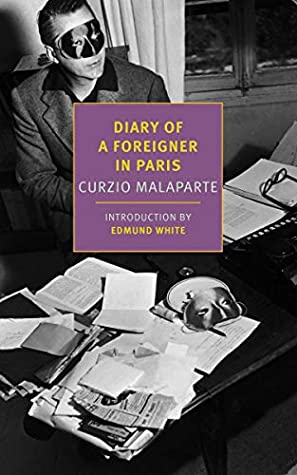 Diary of a Foreigner in Paris finds Malaparte in the City of Light, but since it’s 1947, Paris is a changed place. In 1933, Malaparte left Paris and returned to Italy where he was arrested and imprisoned. After a stint in the Regina Coeli prison, he was sent to the island of Lipari. Malaparte recalls that although he had many friends, it was only his French friends who “defended” him. So Malaparte, who enlisted in the French army at age 16, and whose mother was French returns in 1947 to a country he knows well and loves. He considers himself not to be a “foreigner in France,” but France has changed.

There are some famous people in these pages: Rossellini, Jean Cocteau, Camus, Henry Muller, François Mauriac. At a dinner party, Malaparte feels uncomfortable and senses “a hint of animosity, of repulsion, of dislike.”

Everyone looks at me as if I were not only a foreigner but an uninvited guest.

An icebreaker comes from Henry Muller who tries to smooth things over:

recalling my years in Paris, my time in prison. François Mauriac interrupts him to say that many people in France suffered a great deal in prison as well, that it’s rare to find a Frenchman who hasn’t been in prison, etc.

Malaparte thinks “it’s not my fault if Mussolini declared war on France, if he behaved badly toward France. I think that certain foreigners who came to Rome before the war to pay homage to Mussolini are rather more responsible than the Italians who had no choice.” So hardly a warm welcome for Malaparte.

Malaparte is, at least for this reader, somewhat disingenuous since he supported Italian fascism, fought as a fascist soldier and praised the Wehrmacht at least initially–even if he fell foul of Mussolini later. Yes he was exiled and imprisoned, but the introduction from Edmund White explains that Malaparte is a “mythomane” and that he was “under house arrest in his luxurious villa in Capri and several times imprisoned for short stays in Regina Coeli in Rome, he claimed  for his assiduous anti fascism.” (In reality, he “siphoned off public funds” and remained an avid supporter of Italian fascism.) Mussolini’s son in law personally intervened for Malaparte’s freedom from exile to Lipari.

With WWII still close in the rear view mirror, other intellectuals find it hard to mingle with Malaparte, and it’s easy to see why.

Time passes, to be sure. Oh, does time pass. No one is still Catholic in 1947 the way one was in 1933. Then one was Catholic in a freer, more personal way. Today it’s more political.

This is an interesting, somewhat fragmentary read. It’s more impressionistic than The Kremlin Ball and The Skin, and more philosophical (even if his sometimes twisted thinking is bizarre).  For example, at one point, he outrageously argues that “Gide is the high priest of a religion whose sacrificial altars are at Dachau.” Malaparte tries to make sense of what he interprets as general, wide changes in France and in the French. Of course, there’s never any personal responsibility here, any acknowledgement. At one point he’s asked why he didn’t desert, and decides that the criticism directed towards him is “amusing.” According to Malaparte “there’s no longer any sense of humour in Europe.” So WWII and the Nazis sucked a lot of ‘fun’ out of the world; Malaparte’s comment is tactless at best.

Collaboration was born from the sense of feeling like a winner alongside the Germans. And I wonder why those in the Resistance, why I myself, don’t feel like winners alongside the Anglo-Saxons and the Russians. What is so indigestible for us Europeans about the Russian and Anglo-Saxon victory?

Mythomane and fabulist–this is a study in a very particular personality with Malaparte revealing more about himself than he ever imagined.  For this reader, while this book is my least favourite of the three I’ve read, Malaparte, who obviously feels rather aggrieved by his lack of welcome, by is, above all, a wonderful stylist, and the very scene in which he throws up his hands and asks “what do they want of me?” shows, rather queasily, how slippery people argue their way out of anything.