When All is Said: Anne Griffin

“I’m here to remember–all that I have been and all that I will never be again.”

In Anne Griffin’s novel When All is Said, 84 year-old Maurice Hannigan sits at the bar of at the Rainsford House Hotel, Ireland, and recalls his life. It’s been a long life full of its joys and tragedies. Maurice is now alone; his wife Sadie is dead and his son Kevin is far way in America. Maurice, a very wealthy man who grew up in dire poverty, has sold his house, given away his dog,  and is in the brink of moving into a nursing home, but what is really going on here?

Over the course of the evening, Maurice recalls the five most significant people in his life: including his long-dead older brother Tony,  his still-born daughter, and his wife. 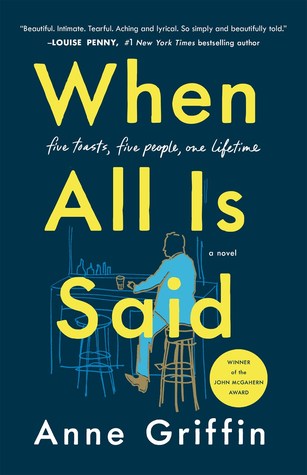 84 years is a long time, and as Maurice recalls his life, we see how the world has changed. Maurice grew up in a large poor family, and his education was interrupted when, at age ten, he went to work at the Dollard estate where his mother worked in the kitchen. The scenes at the Dollard house are miserable with the lord of the manor beating and humiliating his son, Thomas, which has a trickle-down effect to Maurice. These episodes are a reminder of how the world of employment of servants, a world in which servants had to tolerate everything dumped on them, has changed, well at least in some countries–not all.

I was fascinated by the trajectory of … not exactly revenge… no the novel isn’t bitter enough for that. No, the novel has a trajectory of “payback,” re-balance & the settling of old scores. Maurice’s beatings harden him, yes, but they don’t turn him into a ball of rage and revenge. This is a man who remembers the slights and injustices of his past and then singlemindedly triumphs over his humiliations and those who caused them. Maurice isn’t proud of all his actions, and there’s an incident in his past involving a missing valuable coin which has repercussions throughout his life.

The scenes with Maurice and his brother were touching. Here’s Maurice now at age 84, an extremely wealthy man, and yet he grew up in the harshest poverty, with meat a scarce treat. Now Maurice could buy his way out of the problems of his youth, but time doesn’t allow those sorts of second chances.

One of the most poignant episodes of the novel involves Maurice and his acquaintance with Jason, a young man who marries into the Dollard family.

I’d seen Jason around the village over the years since our showdown.  He’d nod in my direction or mouth a very curt hello. Always in a rush somewhere. In return I’d raise my index finger not too high mind. Regret is too strong a word, but I wish I’d made an effort to know him. There was something trustworthy in his bravery the night he’d stood at my our front door asking me to give more money for the Dollard land. But even if I had reached across the divide and stopped for a chat on those days we passed each other by, I doubt he’d have given me the time of day. I wouldn’t have, had the shoe been on the other foot. In the end, he possibly came out the better man.

Some of the memories were moving but others (for this reader) were on the maudlin/wallowing side. There’s a lot of melancholy and misery here, and Maurice’s overwhelming sense of ‘being done’ is evident. The author makes it clear that Maurice is an interesting individual with many stories to tell but he’s been reduced to the those stereotypical roles: Old Man: the one who talks too much, who’s a bit of a nuisance, the one who’s sidelined as a ‘character’ by those who still have their own lives to live. Very sad.

I’m going to admit that I haven’t been the staunchest fan of Hungarian literature. Not that I’ve read that much, but I haven’t been thrilled by what I read. Skylark is the most enjoyable Hungarian novel I’ve read to date. It’s another release from NYRB and I bought my copy because a) it sounded like my sort of thing and b) it’s from NYRB, and I decided to read more of their titles.

The plot is simple enough. Skylark is the improbable nickname given to the only daughter of Akos and Antonia Vajkay. Skylark is middle-aged, dumpy and unattractive, but she is extremely precious to her parents. They all live together in a little home stuffed full of “the ghastly icons of provincial life” in the boring small town of Sarszeg.  Skylark and her mother do the cooking together and generally enjoy each other’s company. Akos is fifty-nine but looks sixty-five, and he’s on early retirement from his job in county administration. Their days are ordered, modest and utterly predictable, and Akos finds that the “last years of his life he spent increasingly preparing for death.” Life has slowly shrunk for Akos:

“He had not moved in society for years. He neither drank nor smoked. Not only his family doctor, Dr Gal, but also the professor he had consulted in Pest had warned against arteriosclerosis and forbidden him from taking alcohol and – more distressingly – from smoking his beloved cigars.

The only passion remaining to him from the past was to sit in his cramped and perpetually damp study, leafing through a volume of Ivan Nagy’s great tome on Hungarian noble families.”

When the book begins, Skylark is going away on holiday for a week to visit an aunt and uncle in the country, and her parents are devastated at the thought of her week-long absence. They simply cannot imagine the days without her, and when she leaves, many tears are shed at the railway station. For the first day the parents imagine Skylark’s journey, anticipating each stage of her adventure. They dread the week ahead asking each other “how will we bear it?” And Akos even hints optimistically “someone might … turn up” for Skylark, now an acknowledged, unattractive old maid.

For the first day, the time drags for Akos and Antonia, and then they reluctantly venture out into town:

“Already some weeks earlier it had been agreed that, for these few days – it was only a week, after all – they wouldn’t cook at home. Skylark, who presided in all culinary matters, recommended the King of Hungary, Sarszeg’s largest restaurant, as the one place where the cuisine was still tolerable.

The three of them detested restaurants  And although they had hardly visited this one, they could talk about it for hours with sneering condescension. The dishwater soups, the tough and gristly meat, the carelessly concocted desserts they served up to the poor unsuspecting bachelors, who had never tasted good home cooking.”

Eating at a restaurant, initially endured as a necessity becomes the event that springboards Akos and his wife back into the vital strains of Sarszeg’s society. Soon all bad habits are resumed. They are courted by some of the town’s most notable flamboyant personalities and find themselves riveted by the town’s intrigue, gossip and scandalous dramas.

Skylark is a bitter-sweet tale–at once it’s joyous and yet also very sad in its examination of the narrowness of our lives and the decisions we make. All families have a unique dynamic, and it often takes being connected to a family unit to understand its pathology.  As Tolstoy notes in Anna Karenina:

“Happy families are all alike; every unhappy family is unhappy in its own way.”

This quote even fits this seemingly boring little family fraught with its own secret little disappointments. The story begins with the parents known as just mother and father, but as the tale develops they become well-rounded human beings that exist beyond any parental function–indeed with their daughter gone they seem to come to life. But at the same time the story is also sympathetic to Skylark. She’s long past what is considered the marriageable age, and when she’s put in the company of her younger flirtatious cousins she’s in the way. Skylark’s great failed, legendary romance with Geza Cifra  (a man whose “summer pimples bloomed brightly like ripe cherries” ) is examined in all its humourous and yet poignant details.

Not a great deal happens here, and yet at the same time the very smallness of the tale of a crucial week is delivered with a delectably natural precision. The tale dissects the Vajkay family dynamic and peels apart the layers revealing  the refuge and also the crutch the family can provide to its less successful members. In contrast to the Vajkay family is Miklos Ijas, would-be poet and assistant editor of the Sarszeg Gazette. He’s a lonely soul whose family has been decimated by scandal. Tainted by the past, he remains outside of mainstream society, yet he is one of the few people to understand the protective relationship the Vajkays have with their daughter. And he seems to envy the ties between this close-knit family. There’s a sense that we are witnessing a world that will soon disappear. Indeed the novel is set in 1899 and already we can hear the rumblings of the end of the Austro-Hungarian Empire.

The introduction by Peter Esterhazy offers biographical information on the book’s author, Dezso Kosztolanyi. This was welcome as I had never heard of this author before. So thanks once more to NYRB. I enjoy Skylark immensely and found that this good-natured tale grew on me as it continued. Here’s one last quote showing Kosztolanyi’s lively use of language:

“The market seethed in the sweltering heat, humming with noise and ablaze with every imaginable colour. Red peppers shone as brightly as the florid scarlet paint in the paint-shop window across the square. Cabbages displayed their pale-green, silken frills, violet grapes glistened, marrows whitened in the sun, and yellowing melons, already past their best, gave off a sickly choleroid stench.”

This edition is translated by Richard Aczel