“Dazzle a man and you blind him.”

From a few pre-publication quotes, I had a feeling that I’d love Catalina, a debut novel from Liska Jacobs. What is so attractive, so alluring about Kamikaze Women–self-destructive women whose messy personal disasters surround them in a blurring cloud of detritus? These are women who simultaneously attract and repel–women whose lives crumble at the foundations as they careen, hopelessly, from one catastrophe to another.

The Kamikaze Woman in Catalina is our narrator Elsa, who washes back up in California after being ‘let-go’ from her job as personal assistant to MoMA’s curator, the very married Eric Reinhardt. Elsa and Eric had an affair, and we don’t know what went wrong, but the affair ends with Elsa being given a “generous compensation” package by Human Resources. We get, right away, that Elsa is being discarded and paid off, but Elsa, hard-as-nails, but also interestingly brittle, doesn’t quite ‘get’ the fact that she’s been summarily dumped. 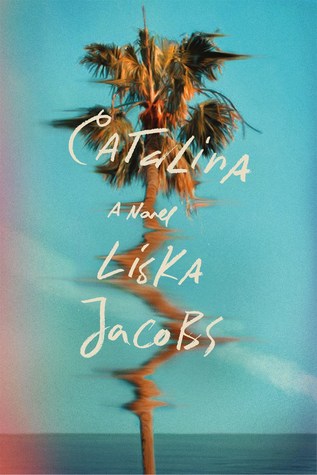 Elsa begins to think that New York feels “predatory,” and so home to Bakersfield and her mother’s house, ostensibly to lick her wounds. But home doesn’t offer consolation:

Poor girl, the joke’s on you. You’re back. Your old life just waiting for you, like a second skin.

So Elsa escapes with a quick flight to LA and then it’s a short drive to Santa Monica. Elsa holes up in a luxury hotel, enrolling in a yoga course but going to the bar instead, dropping money even as she tries not to think about Eric from the blurriness of a cocktail of unknown drugs (stolen from her mother) and alcohol.

There are many bottles. Probably too many, I think. So I combine a few that look similar. Who cares? I definitely do not. After all. I’m doing what Eric suggested on that last day: Go Home. See your mother in Bakersfield. Be open to possibility. Fine, a blue one if the mood strikes, or maybe a white, or sea-foam green. So many possibilities.

The scenes at the hotel are marvellous. The sniffy disapproval of the waiters and other guests as Elsa polishes off bottle after bottle of alcohol, ordering up coke though room service, and the way she teases a Lancelot in bellboy clothing.

Instead I call room service and order another Bloody Mary, which, I tell myself, is basically a salad.

Finally, with numerous traumas and dramas played out, Elsa calls up her old friend Charly, who is married to Jared. Elsa expects her friend to be mired in domestic bliss, but it’s clear that there are problems between Charly and Jared. He makes cruel comments to his wife and keeps a lascivious eye on Elsa:

“Have you been working out?” he asks. I tell him the most exercise I get is lifting a wineglass to my mouth or opening a prescription bottle. This enthralls him.

Elsa’s ex-husband Robbie now works for Jared, and so before long, Elsa finds herself on a trip to Catalina to attend a jazz festival with Charly, Jared, Robbie, his new girlfriend Jane and millionaire boat owner, the very alpha male, Tom. Tom’s family own ” a potato chip company, real American money.”

Of course, this trip is a recipe for disaster.  Charly’s marriage is unhappy, Jared is openly womanizing, Robbie still has the hots for his ex and Jane, a restaurant manager,  is … well… on the tiresome side. “She’s always doing some marathon or on a new diet.”  She’s “very animated. Her arms and hands wave as if she were an instructor worried about losing Robbie’s interest.” As for Tom, he says that Elsa, brought along on the Catalina trip as a date, reminds him of his first wife:

Hot as shit but absolutely bonkers.

Catalina is the provocative, unsettling  story of one woman’s meltdown, but it’s also a story of a handful of people behaving badly. A novel of Bad Manners, if you will. Everyone thinks that wildly successful Elsa is back on an extended holiday, but Tom, who claims he can hear Elsa’s pills rattling in her bag, has Elsa’s number, and he delights in watching the trip implode as couples fight, friction escalates and lives collide.

The big question here is Elsa’s state before being dumped by Eric. There are elusive shards of the past tantalizingly submerged in the plot, and most of these float to the surface through Elsa’s memories of her marriage to Robbie. But this is a woman who doesn’t want to examine her life and her mistakes; she’s much prefer to blur the past, and the present, with alcohol and whatever pills she can dig out from the alarmingly diminishing supply which lurks at the bottom of her bag.  I loved Catalina; it’s just the sort of book I am always looking for and find so rarely–people behaving badly within the rails of polite society.

I squint to try to make out where the pier should be, where the Miramar is, where the airport and Charly and Jared’s house should be. Bakersfield just north and inland-New York and Eric a few thousand miles beyond that. It’s there, I’m sure. I suddenly feel lightheaded. Strange. Like catching your reflection, that moment just before recognition, when you are a stranger to yourself.

(The idea of Kamikaze Women comes from Woody Allen and the film Husbands and Wives.)