“These artist types,” said Douglas, “are poison to women. I read that once.”

Poor Angus from Scottish author Robin Jenkins is an examination of the artistic life. Does the pursuit of art exclude the artist from moral obligations? Or is Art simply an excuse for selfishness? Painter Angus McAllister returns to the Hebridean island of his birth ostensibly to paint his masterpiece. He prefers to paint nudes and during the course of his modest career, he’s had many love affairs but has always managed to float away free of any entanglement. Angus “implied” that “being married would cripple him as an artist.” And, in truth, having a wife in tow, even if she were some sort of saint, would cramp Angus’s style. He can give a lot to a woman: attention (during the portrait phase), sex and romance (for a while anyway), and he’s the perfect (wild fling) antidote to the boring, stodgy, unfaithful husband. 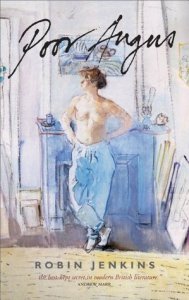 There are two women who feature prominently in Angus’s past: the married Australian, good natured, boisterous redhead Nell and Fidelia “the most delectable of women,” part-Portuguese, and part Filipino. She is also married but is separated from her brothel owning husband.

So right away it’s established that Angus is one for the ladies, on his slippery terms, and he’s remained successfully unencumbered, always moving on when things become too serious or demanding. Both Nell and Fidelia were close calls in terms of more permanent involvement.

Angus, on his home turf, a hermit in a remote house on a remote island should be free of harassments but then Janet, a local barmaid who claims to have second sight, insists on moving in with him. She intends to have an affair with Angus to make her golf-obsessed, philandering boorish prig of a husband, Douglas, jealous. Angus isn’t comfortable with Janet moving in, but there are no other female prospects on the island, and she is beautiful. Plus there’s something about Janet–her determined willfulness that brooks no argument.

Angus is already set for domestic trouble but then the past converges upon him in the form of both of his former mistresses. Nell has run away from Bruce, her cheating, golf-loving husband, and Fidelia, with her child in tow, is on the run from her wealthy, powerful husband.

There’s a lot of humour here in Poor Angus: almost Shakespearean in a way, and most of the fun comes when the two abandoned husbands, Douglas and Bruce meet and immediately hit it off; after all they have so much in common. Both men are addicted to golf, but beyond the fun of the sport, it’s an easy way to access sex with female golf players. In spite of the fact the stuffy, self-righteous Douglas and the affable Bruce have been serially unfaithfully, they both blame their wives for running away.

The two abandoned husbands have dinner together and with Bruce loudly swearing his head off (“he’s an Australian, of course,”) they commiserate, dishonestly, about the vagaries of their wives and their respective golf handicaps.

“She’d got it into her head I didn’t want her any more. I guess I was doing a bit of fucking around. She was drinking too much and letting herself go to fat.”

The two old ladies were fairly enjoying their roast lamb.

“Her age, the doctor said. Menopausal stress. Poor Nell. Have you any kids, [Douglas] Maxwell?”

A few pages of Douglas and Maxwell, who unsurprisingly hit it off immediately, and we can see just why Nell and Janet were attracted to Angus as an antidote, but when aggrieved husbands and disgruntled wives converge on Angus’s retreat, the women suddenly see Angus’s horrible shortcomings as they wrestle with the knowledge that the antidote, hothouse nature of extra-marital affairs precludes judgement. Three very different misused women and four very different dickhead men. Douglas and Bruce hide their bad behaviour behind their golf, but is Angus so very different? Does he hide his bad behaviour behind Art? The scene is set for both comedy and disaster:

“All I want is to be left alone to get on with my painting. That’s all I’ve ever wanted. Why can’t you all leave me alone?”
“You use people, Angus. They don’t like being used and then thrown away like paper hankies.”