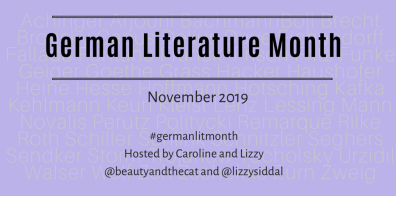 Werner Bergengruen’s The Hornung Homesickness (Das Hornunger Heimweh) is one of my best-of-year reads. The second story in the collection, The High Forest (Der Hochwald) by Adalbert Stifter was a bit too romantic for my taste, but I thoroughly enjoyed the premise and the descriptions.

This story is set during the Thirty Years War. The narrator begins with a description of the landscape and a ruined castle surrounded by a forest, and then the tale shifts to two centuries earlier when this castle was the home of Heinrich of Wittinghausen. There’s a gentle, peaceful domestic scene which focuses on two sisters, Clarissa and Johanna. But into this idyllic scene threats of danger and “spooky tales” worm their way into the conversation. There’s been a murder in the woods and there are rumours of a vicious poacher.

The sun had by now risen above the forest; the late morning light shone and glistened over the silent tree-tops. A thin beam of sunlight gradually began to cover the embroidery; and then from outside came a light knocking–someone seeking entry.

It’s the girls’ father, and with a light manner, he suggests a trip into the forest “wilderness” to explore an area where, apparently there’s a tower of rock from which the castle can be seen. The suggestion of what seems to be an excursion is actually an excuse to send the girls to safely as their father is expecting an attack from the Swedes and in every likelihood their “home will be swept away as they pass through.”. The girls are subsequently transported deep into the forest and placed under the protection of a trusted friend of their father.

The idyllic wilderness has its sinister, secretive aspects, and added to this, there’s a telescope so that the girls can watch their castle home and see if it still stands.

Largely driving the rapid changes in fortunes of the house have been the members themselves. Nature has never brought forth a patient Gemperlein, never one who could not by all rights carry the title of “The Combative.” This powerful familial trait was held by all. Yet in contrast to this, there are no sharper contradictions than how the different generations of Gemperleins stood to one another in political conviction.

While those of one generation spent their life with sword in hand demonstrating their dependence upon the hereditary ruler, sealing this with their blood until the last drop had spurted out, the others made themselves into pioneers of revolution and died heroes to their cause, as enemies of those in power and as wild despisers of every form of subjugation.

The last Baron died leaving two sons, Barons Friedrich and Ludwig, and in these two we find “both types of the race, the feudal and the radical.” Predictably Friedrich attended the military academy and Ludwig went off to university. In time, both men turn with some frustration from their ideals and they settle together in harmony at the family estate at Vlastovitz. In middle age, the brothers decide to wed, and it’s this decision that unleashes the story’s action.

The Barons von Gemperlein is my second favourite in this three story collection (with The Hornung Homesickness coming in first place and The High Forest third). At times The Barons von Gemperlein is funny, and then at one point my sympathies for Ludwig’s cause were abandoned. This story explores how the brothers’ characters both direct and impede courtship, so while it’s a tale of competitive siblings, it’s also philosophical.

This three story collection is a treasure, and for this reader, a wonderful find. There’s a pertinent introduction and extensive notes after each story. I hope the translator publishes more as these stories are marvelous.

(*note: Maria von Eschenbach is also Marie within the text)

The Dinner by Herman Koch

“When faced with lower intelligences, the most effective strategy in my opinion is tell a bare-faced lie: with a lie, you give the pinheads a chance to retreat without losing face.”

I’ve discovered that I share some reading tastes with Tom from A Common Reader , so when he read and reviewed Herman Koch’s book, The Dinner, I knew I’d enjoy it too. The narrative (which is hilariously funny, btw)  appeared to be taking me in one direction–something along the lines of a nasty interior dialogue which mostly consisted of an under-achieving brother bitching about the success of his sibling–in other words, something we can all relate too. In terms of the fussy sniping, the narrative style is reminiscent of Thomas Bernhard’s novels, and reminds me of the translator Richard Pevear’s term “the dialectic of isolated consciousness.”  Just as I was laughing, and enjoying the ride, the book took an unexpected turn, and there I was in the middle of a bunch of nasty characters who had to make a serious, life-altering moral decision.

The story is set around, as the title suggests, a dinner, at a swanky Amsterdam restaurant attended by two very different brothers and their wives. Serge Lohman, a politician, “leader of the largest opposition party,” the much more affluent and successful brother, is married to Babette. Paul Lohman, and the unreliable, unempoyed narrator of this story is married to Claire. There’s a lot of unresolved baggage between the brothers, and it’s one of those social situations in which every decision, every choice made is assumed to be making some sort of point or insult. Serge, for example, part of “that class of Dutch people who think everything French is ‘great’ ” selected the restaurant, and it’s impossible to get a table there unless you book months in advance. It’s not impossible for “nationally famous” Serge, of course, and so even the selection of the restaurant seems to be a dig at his brother’s lesser position in society.  At another point, Paul selects an appetizer he dislikes simply because he thinks “to have the same appetizer as my brother was out of the question,” as it would look as though he “wasn’t original enough to choose an appetizer of my own.” Yes the relationship between the brothers is that poisoned. And so you ask why on earth are they spending a tortured evening together? They are there to discuss an incident that involves their sons. That’s as much as I can say.

I knew I was going to thoroughly enjoy this book almost immediately, but by the time we got around to the toadying floor manager who describes every dish and its point of origin as if he personally trekked hundreds of miles to hunt down unique food items for his customers,  I was laughing out loud:

“The crayfish are dressed in a vinaigrette of tarragon and baby green onions,” said the manager: he was at Serge’s plate now, pointing with his pinky. “And these chanterelles from the Vosges.” The pinky vaulted over the crayfish to point out two brown toadstools, cut lengthwise; the “chanterelles” looked as though they had been uprooted only a few minutes ago: what was sticking to the bottom, I figured, could only be dirt.

It was a well-groomed hand, as I’d established while the manager was uncorking the bottle of Chablis Serge had ordered. Despite my earlier suspicions, there was nothing about him to hide; neat cuticles without hangnails, the nail itself trimmed short, no rings–it looked freshly washed, no signs of anything chronic. For the hand of a stranger, though, I felt as though it was coming too close to our food–it hovered less than an inch above the crayfish; the pinky itself came even closer, almost brushing the chanterelles.

I wasn’t sure I would be able to sit still when that hand, with its pinky was floating over my own plate, but for the sake of a pleasant evening, I knew it would be better to restrain myself.

As the courses pile on, and the detailed origins of the food continue, tensions mount and old scores are revealed. There’s an argument over the merits of the “new Woody Allen,”  with Serge declaring the film a “masterpiece,” while confessing that he lusts after Scarlett Johansson (“I wouldn’t kick her out of bed for eating crackers,”). Paul is then boxed into taking an oppositional statement about Woody Allen, the film, and Serge’s lust object. Babette is already visibly upset when she arrives with Serge and as the evening wears on, much to Paul’s glee a number of embarrassing scenes take place and threaten total meltdown.

As the situation that created the need for a dinner engagement is gradually revealed, additional details of the private lives of these families surface. Paul and Claire have a teenage son, Michel. Serge and Babette have two children: Rick, who is the same age as Michel, and an autistic daughter, 13-year-old Valerie. They also have an adopted son, Beau from Burkina Faso, according to our narrator, as part of–Paul nastily suggests– a  “rent-to-own agreement.” Paul hints that the adoption was motivated by career concerns and notes that after Serge and Babette adopted Beau, the “ African son,” Serge “began to pose more frequently for family photos.”  Our unreliable narrator loathes his brother, and since Serge is an ambitious politician, someone who is obviously conscious of image, it’s difficult to pierce through Paul’s perceptions to find reality. Paul frequently predicts Serge’s attitudes and behavior. We know, for example, that Serge attended a “six week wine course” at night school, and thereafter with diploma in hand, became one of those annoying wine experts

I can’t remember exactly when he first presented himself as a connoisseur; in my memory it seems to have happened quite suddenly. From one day to the next he became the one who picked up the wine list and mumbled something about the “earthy aftertaste” of Portuguese wines from the Alentejo: it had been a sort of coup, really for from that day on, the wine list automatically ended up in Serge’s hands.

The menu courses keep rolling in, the floor manager and his intrusive pinky keep appearing, and between the four diners, layers of pathology are slowly revealed. The motivating factors behind the dinner are cleverly supported with memories of the past and through a series of revelations, a portrait of skewed morality, deeply troubling parenting, and mental illness emerge from the wreckage of the evening. In the final evaluation, however, the book is not what it initially appears to be, and the dynamics of the relationships between two brothers and their wives are subsumed into a statement about modern Dutch society. The Dinner is especially recommended to fans of Michael Dibdin’s Dirty Tricks  and Henry Sutton’s Get Me Out of Here.

Thanks for the suggestion, Tom.