“She gets the eerie feeling that this it it-that Philadelphia has lured her back home to trap her, like one of those fly-eating plants.”

Revolver, written by Duane Swierczynski, goes back and forth through three separate timelines to follow three generations of a Philadelphia Polish-American family through a narrative of disturbingly unsolved crimes. In 1964-1965, white police officer, Stan Walczak, teamed with black officer George Wildey during race riots, unknowingly triggers the attention of some powerful people when he begins helping Wildey with an investigation of heroin use in the city. In 1995, Stan’s son, Jim Walczak, haunted by the unsolved murder of his father, has an opportunity for revenge, and in 2015, Jim’s adopted daughter, Audrey, struggling to finish her thesis in forensic science, begins reinvestigating the unsolved murder of her grandfather, Stan Walczak. 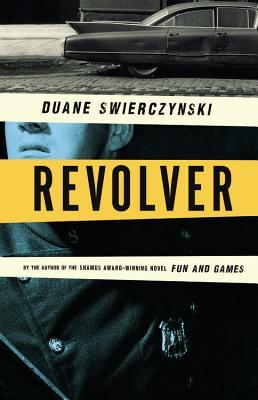 The author takes us into the lives of the Walczak family through their ties to the Philadelphia PD. The book opens in 1965 with officers Walczak and Wildey waiting in a North Philly bar for a snitch who never arrives. It’s a powerful beginning which then segues to 1995 and picks up with homicide detective, Jim Walczak. It’s through Jim’s discussions with his son, that we know that Stan Walczak was murdered, and that the crime remains, officially, unsolved. Jim Walczak is about to investigate a case which will haunt him–the rape and murder of a young female journalist.

In the third timeline, 2015, Jim Walczak is retired, but his two sons, Cary and Stas, are both police officers. Audrey, the black sheep of the family, studying to be a forensic scientist, flies into Philadelphia to attend a memorial ceremony for her long-deceased, grandfather, Stan Walczak. Estranged from her family, Audrey hasn’t been home in years, and when she decides to start digging into her grandfather’s unsolved murder, she very quickly discovers that the established narrative about the crime is fundamentally untrue….

Swierczynski novels, and regular readers of this blog know that I’m a fan of this author, are always highly readable. I read this is a couple of sittings, juggling timelines and unsolved crimes in my head. The novel argues that the present is impacted by the past, and that is certainly true in the case of the Walczak family. Moving back and forth through time, we see how the male police officers in the Walczak family sacrifice home life–not for career concerns but due to the sheer dark weight of the crimes they investigate. Some scenes show the Walczak males coming home at night after facing scenes of horror, and then they have to switch gears and pretend to be ‘normal’ for their wives and children who, wrapped in a cocoon of safety, are largely oblivious. Jim Walczak copes with the two vastly different areas of his life by understanding that there’s an “Outer Jim,” and an “Inner Jim.” But that doesn’t stop him from wondering how his father coped with juggling police work and family life.

He wishes he could ask his father how he did it. The whole family thing. Granted, his pop was a career patrolman. He wasn’t obsessing over homicides. But even towards the end of his career, when they assigned him to the worst district in the city, Stan Walczak was there. He was present. Drinking tomato juice and laughing with Jim before school in the morning. Waking up before he got home from school to fix him a snack. Taking his boy to the Phillies games. (When was the last time you took your kids to a ball game?) His pop never talked about cases. Somehow he left it all in the squad car.

Written in the author’s inimitable style, tension blended with relaxed humor, over the course of this story of power, corruption and duty to crime enforcement, the history of three generations of the same family unfolds. We see sons who identify with their fathers; sons who want to be involved and solve the crimes their fathers can’t. It’s in this fashion that three generations of Walczaks, tied to the past, pay a price for their commitment to the police department.

As an aside, the author dedicated this book to his relative Philadelphia police officer, Joseph T. Swierczynski, “who was gunned down by a gangster” in 1919. So the echoes of crimes in the past and how they impact the present continue in a real-life domino effect. Once again, as in Swierczynski’s fantastic novel, Canary (and there’s a connection between Canary and Revolver,) the plot is firmly set in the author’s native Philadelphia, so the plot is steeped in history–the good and the bad sides of a city that Swierczynski obviously cares about.

This author has an intuitive knack of creating fiction that reflects the pulse of modern America. Revolver addresses, through the lives of its troubled characters, the very personal cost of serving as an undervalued cop in society. For this reader, Swierczynski is one of the most exciting names in American crime fiction. Always unpredictable, he never churns out old plots with new titles, and you can never guess where his next book is going to take you.

Tinseltown: Murder, Morphine, and Madness at the Dawn of Hollywood by William J. Mann

“But in fact Billy had been a blank screen, onto which Mabel, and so many others, had projected their own hopes and needs.”

While William J. Mann’s non fiction book Tinseltown: Murder, Morphine and Madness at the Dawn of Hollywood centres on the unsolved murder of director William Desmond Taylor, the sensational 1922 murder is set against the backdrop of censorship, scandal and the shifting times. Mann argues that a constellation of dark events which include the death of Olive Thomas, the Fatty Arbuckle trials, and the murder of William Desmond Taylor all paved the road to the establishment of censorship and fed support for the various ‘moral’ crusaders who saw Hollywood as a den of iniquity which threatened the morals of the audience. The book is essential reading for any readers interested in early Hollywood and the development of the Hays Code.

This was an era when “thirty-five million Americans–one out of three–went to the movies at least once a week.” Everyone agreed–politicians, fans, film moguls, and moral crusaders–that the film industry was impacting culture, and this resulted in a range of opinions and a figurative tug-of-war between the opposing camps on the subject of censorship. Film moguls, such as Hungarian immigrant and founder of Paramount Pictures, Adolph Zukor, and Marcus Loew, founder of MGM, for example, were loath to hand over censorship power to any outsiders, and for a period, the film industry self-regulated. This is where William Desmond Taylor comes in as an important figure. He was “well regarded in the film colony” but was a “bit of a cipher.” An “ardent defender against the increasing calls for censorship,” he was a stalwart, well-respected spokesperson for the film industry. His death and the subsequent scandal were building blocks in the road to film censorship. The “murder of Taylor–the man who’d once argued for the decency and integrity of Tinseltown–ratcheted the campaign of the reformers up to new levels.”

The book delves into the months leading up to the crime–Taylor’s increased nervousness and the spate of burglaries at his home. The night of the murder is detailed along with various eye-witness accounts, information regarding the removal of evidence by the general manager of Paramount Pictures, and the initial bungling of the case (Taylor was first thought to have died of natural causes.)  Four women are part of the author’s dissection of the crime: actress Mabel Normand whose cocaine habit (rumoured to be around 2,000 a month) was a matter for the press, Margaret Gibson, who reinvented herself as Pamela Palmer following her arrest in Little Tokyo for prostitution, former child star Mary Miles Minter and her formidable mother, Mrs. Shelby.

There’s so much intriguing information raised here: why, for example was Mrs. Shelby repeatedly given a layer of protection by Woolwine, the DA, and why was Margaret “Gibby” Gibson rehired repeatedly by film producer Jesse Lasky and the Famous Players Corporation against the odds?

With an utterly undistinguished filmography, a record for prostitution, and a desire to form a company that would compete with Famous Players, Gibby should have been a pariah in Lasky’s office. But instead she had now been hired for a second major feature at the biggest, most prestigious studio in the industry.

Author William J. Mann offers plenty of explanation for the events. The personalities of these long-dead people leap from the pages–from Zukor’s megalomania, the sacrifice of Fatty Arbuckle to a vicious witch-hunt, Will Hays’ drive to become independent from the movie moguls, Margaret Gibson’s history of involvement with the criminal element to Mabel Normand’s gentle determination to defy the gossip mongers and survive without scandal. In this compelling book, Mann creates a cogent argument that William Desmond Taylor’s past was involved in the solution to his murder. A must-read for fans of early Hollywood.

Included in the book is a chapter devoted to a confession to the murder and another much-appreciated chapter:”What Happened to Everyone Else.” The author also explains his sources: letters telegrams, FBI files, police reports, news accounts, production records and emphasizes that he “did not venture unbidden into the minds of my subjects. When I write ‘how terribly she missed him’ or ‘Zukor seethed,’ these descriptions are based in interviews or memoirs by the subject on question, wherein such feelings, attitudes, or motivations were disclosed or can be deduced.” I appreciated this clarification. Too many books in this genre tend to offer the thoughts of characters, and as a reader I’m left wondering what really happened and what is made up. Finally the author also acknowledges his debt to http://www.taylorology.com.

And so out had come the censor’s shears. In Pennsylvania, state-appointed moral guardians had even snipped out scenes of a “woman making baby clothes, on the ground that children believe that babies are brought by the stork.” What was next? asked the New York Times. “Will it be a crime to show a picture of a man giving his wife a Christmas present on the ground that it tends to destroy faith in Santa Claus?”