“She’s been around, she knows what the score is, she ain’t some punk bobby-soxer with the mood in her eyes. Dames in her racket, kid–bouncing around in these nightclubs with everything showing but their appetite–they all belong to the same club. The let’s-see-the-dough-honey-and-I’ll-ask-you-no-questions.” 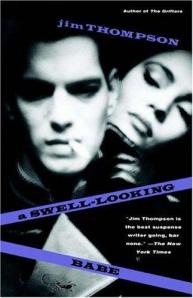 The noir fest continues with the third selection: A Swell-Looking Babe. I picked this one for its title. Another weird tale from another unreliable narrator, but that’s not to say that Thompson is in any way repetitive. The earlier titles I read: The Killer Inside Me and Savage Night both included an unreliable narrator, but in A Swell-Looking Babe Thompson creates a completely new (albeit unreliable) character in Dusty Rhodes, and what a little sickie he is. Did Thompson subscribe to a journal of abnormal psychology, pick a chapter and then systematically construct an individual according to his reading? That’s not a serious question, by the way, but only an observation on Thompson’s ingenuity when it comes to creating various pathological character types.

So what’s the pathology here? At first the pathological aspects of Dusty (Jim) Rhodes aren’t glaringly apparent. In fact Dusty, a night shift bell boy at the Manton hotel appears to be possess a lot of positive attributes. According to his own evaluation, he’s extremely good-looking. He had planned to be a doctor, but following the death of his adoptive mother and the disgrace of his ex-principal father, Dusty drops out of college. He’s now the sole wage earner, so he takes a job as a night-time bell boy as the night shift gets more tips than the day workers.

Dusty’s home life with his father is problematic. Mr. Rhodes, just past sixty, is a broken man after losing his job on the grounds of being a Red sympathizer (these are the McCarthy years). The unemployed widower, already in frail health, appears to be shifting into senility:

He went days on end without shaving, weeks without a haircut. His soiled baggy clothes looked like they’d been slept in. He looked like a tramp–like a scarecrow out of a cornfield. And that wasn’t the worst of it. The worst was what he’d let happen to himself mentally. He seemed to take pride in being absent-minded, in seeing how stupidly he could do the few things that were left for him to do.

Dusty continually hands his father money, but it seems to disappear. Dusty suspects that his father gives every penny to lawyers, “those dirty thieving shysters” in an attempt to rally a lawsuit against the school district. While Dusty works hard to support his ailing father, he comes under constant criticism from the doctor who treats Mr. Rhodes and also from the lawyer, Kossmeyer.

Sure, he’d seen some good-looking women before, at the Manton and away from it. He’d seen them, and they’d made it pretty obvious that they saw him. But he’d never come up against anything like this, a woman who was not just one but all women. that was the way he thought of her, right from the first moment. All women–the personification, the refined best of them all. She was twenty. She was thirty. She was sixty.

This goddess, and that’s how she’s described more than once by Dusty, is exotic dancer Marcia Hillis. He can’t quite place her age–she has soft, lustrous gray hair, she oozes sex, and she has a fantastic figure. She checks into the Manton hotel one night after midnight. There’s something fishy about the set-up and it stinks from the start. Single women are not allowed to take a room, but the night desk clerk, Bascom, not only lets her check in, he also gives her one of the cheaper rooms usually reserved for long-time customers.

There’s the possibility that she’s a spotter, “some prize looker” hired by the hotel management. These undercover, seductive dames test hotel employees by luring them to sex acts and then blowing the whistle to the boss. Since Marcia Hillis isn’t the typical guest, Dusty suspects that she may well be a spotter. And indeed, she does tease Dusty after getting him alone in her hotel room:

A little red flag in his mind was swinging for all it was worth. He didn’t want any tip from her, only to get out of there before something happened that had better not happen.

Poor Dusty. He’s overworked, underappreciated, & missed his chance at college and a career as a doctor. His father is a leech, and everyone picks on him: hotel management, his father’s doctor and his father’s lawyer. Yes this  is the narrative Thompson constructs, but through events that take place and a series of flashbacks, we see that all is not as it first appears. Under the surface there’s some very ugly stuff going on. Yes there’s a heist, a con and a double cross, but even worse than that, there’s a man with some very serious mummy issues….

Through the years, he had been so formed that he could accept only one woman. And without her there could be nothing–no rest, no peace, no completion. Only an aching void where strange fears dwelled and multiplied, and gnawed unceasingly.

Thompson begins to drop hints that Dusty’s carefully constructed life story won’t stand up to scrutiny, and as the heat turns up on Dusty, he unravels.

Freud could have made a case study of Dusty, and depending on how you read A Swell-Looking Dame, you might argue that Dusty’s mother needed professional help too. In Savage Art, a Jim Thompson biography by Robert Polito, several notes appear about the intensity of the relationship between Thompson and his mother, so you can read what you want into that. On another biographical note, Thompson worked as a bellboy at The Hotel Texas when he was 17-years-old, and interestingly, the provisional title for A Swell-Looking Babe was What the Bellboy Saw (which has a Victorian peepshow ring to it).  This early employment gave Thompson plenty of creative material to use later on, for while The Hotel Texas looked like a decent joint on the outside, the young bellboy was expected to procure booze, drugs and dames for the guests. He earned $15 a month, but netted about $300 a week in tips. Thompson was supporting his family at the time, so the cash was needed. On a fascinating note, Thompson was nicknamed Dolly by the hotel staff, and that’s the name of the main character in my next pick: A Hell of a Woman.

In order of preference so far, I’d place A Swell-Looking Babe above Savage Night but below The Killer Inside Me.