Voices from Italian author Dacia Maraini is the story of a radio personality who becomes swept up in the investigation surrounding the murder of her neighbour. As a crime novel, it’s interesting and different, and that’s partly due to the characters involved and partly due to the fact that the main character never sees herself as a sleuth. 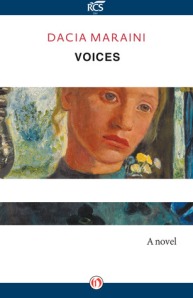 Michela Canova  returns home from a work-related trip to Marseilles and immediately picks up the vibe that something is wrong; the doorkeeper and her husband are absent from their usual positions at the porter’s lodge, and there’s a strong smell of disinfectant in the air. Michela learns that her neighbor was murdered five days earlier, “twenty stab wounds in a frenzied attack.” Nothing was stolen and there are no indications that anyone broke into the apartment located on the building’s top floor. The conclusion is that the victim opened the door to the killer on the night of her death. In the aftermath of the shocking news, Michela tries to dredge up memories of the dead girl:

A woman living behind the door opposite to mine and I did not even know her name. I would meet her sometimes in the lift. I would look at her much as one looks at someone in a train or a bus, with a feeling of guilt for my ill-manner curiosity.

The murdered girl, Angela Bari, led a strange life. She was supposedly a part-time actress, but she seemed unemployed, so how did she manage to live so well? Why did she keep a strange schedule, returning home so late at night? When Michela, who is especially talented when it comes to voice recognition, listens to her answering machine, she’s certain that Angela left two interrupted messages. Already deeply troubled and feeling involved in the murder of Angela Bari due to proximity and a feeling of guilt that she failed to befriend her neighbor, Michela becomes obsessed with finding the truth about the dead girl. Coincidentally, the director of the radio station, Michela’s boss asks Michela to create a “series of forty programmes about crimes against women.” The programme is designed to appeal to the station’s women listeners as well as address the social issue and the shocking statistic that “65 percent of crimes against women go unpunished.” Michela takes the job and while she is supposed to be working on the issue of crime against women from a broad perspective, most of her efforts are directed towards the life and death of Angela Bari.

Michela isn’t a detective, but she rapidly discovers some glaring inconsistencies about Angela’s life; everyone seems to have a different opinion about who and what she was, and there are times when Michela wonders if people are even talking about the same girl:

Something about her light and heedless way of walking worries me; without my wishing it, Angela Bari has entered into my thoughts and pitched camp, waiting even though I cannot really imagine what she could possibly expect from me.

Perhaps the most bizarre statements come from Angela Bari’s own family–the very people who are expected to have known her the best. Angela’s sister, Ludovica Bari took her sweet time arriving at the Angela’s apartment when she was notified of her sister’s death, and she “seemed more irritable than grief-stricken.” According to Ludovica, Angela was “mentally ill.” Angela’s mother, a neurotic recluse, isn’t interested in solving her daughter’s murder and argues, while passing the chocolates, that “one should leave the dead in peace.” Angela’s smooth, charismatic boyfriend, Carlini tells Michela that people “are made up of so many different strands, so many different layers of truth.” and that Angela was full of contradictions.

The novel swings back and forth from Michela’s focus on Angela’s case to crimes against women in general–with the constant motif of voices. Michela trusts her knowledge of voices, but in this case, is she correct? Those interviewed all have their own interpretation of who Angela was, but when one steps into “the relationships between members of a nuclear family, ” one walks through a tangled, murky “minefield.”  Voices is not a suspenseful, action-packed read, and instead, while there are periodic threats, there’s an underlying philosophical thread about women as victims of violence and crime as a social phenomenon. Here’s Michela mulling over a crime novel by Patricia Highsmith:

I am curious about her as a feminine misogynist and intrigued by her understanding of crime. What is it that drives the hidden demon, this fiercely ironic writer seems to be asking; is it the inescapable pain we carry sewn into our heart as if it were a secret pocket, or is it a loss of moral responsiveness? Is crime a disease, and how do we get it?

Voices is not perfect. While the motif of voices is used repeatedly in the novel to good effect, the author tries to make a larger statement about violence towards women, and this is too big a subject for this book so the attempt is only partly successful. Some of the book’s message about violence towards women comes through the character of Adele Sofia, Commissioner of Police, but there are passages in which Michela reads case summary after case summary of the unsolved brutal crimes against women and children. While Michela’s research into the subject of violence towards women is a nice segue into the investigation of Angela’s death, the information load detailing various crimes doesn’t add a lot to the plot.

Angela Bari is dead when the novel begins, and yet she remains a strong, yet strangely and sadly elusive presence throughout the course of the book. Michela’s connection with her neighbor makes for an intriguing, not gripping, read. While the solution of the murder is of paramount importance to Michela, the book at times includes some anticlimactic moments which seem deliberately created to veer this book away from nail-biting suspense. As a crime novel, it’s another example of how an author can tackle crime through a different, refreshing perspective.

8 responses to “Voices by Dacia Maraini”