Honour & Other People’s Children from Australian author Helen Garner presents two novellas about break ups.  Of the two stories, I much preferred Honour. Other People’s Children seemed to lack the focus of Honour, and while on the surface it sounded interesting (relationships between people in a shared house) the story lacked a sharp focus, and I couldn’t quite grasp a sense of the characters.

Honour, on the other hand, is an good, albeit painful read. Kathleen and Frank are married, and have a child, Flo, together. They are amicably separated for years when one day, Frank abruptly asks for a divorce. He tells Kathleen that “it won’t be any different between us. Just on paper.” For her part, Kathleen asks “what’s put this into your head?” It’s not really a ‘what’ as much as a ‘who,’ and Frank rather weakly admits that it’s his girlfriend Jenny’s idea which rather sneakily puts this decision between the two women in Frank’s life while he shrugs off responsibility. 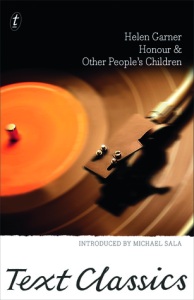 Frank’s decision to ask for a divorce … no, it’s Jenny’s idea right and Frank is just going with the flow, puts new tensions into the relationships between Kathleen, Frank and Jenny. This soon becomes apparent when Kathleen goes to Jenny’s home to pick up Flo and runs into Jenny. This is a first meeting.

They did not perceive their striking similarity; they both made emphatic gestures and grimaces in speech, stressed certain words ironically, cast their eyes aside in mid-sentence as if a sustained gaze might burn the listener. Around each of them quivered an aura of terrific restraint. If they both let go at once, they might blow each other out of the room.

Trouble follows when Flo announces that she wants to live with Frank and Jenny. There’s one wonderful scene when Kathleen and Frank, with Jenny as the awkward third party, take a trip down memory lane with shared reminiscences. What follows is purely territorial with Frank and Kathleen excluding Jenny. I don’t know Jenny put up with it, but then payback comes later.

Divorce… I always laugh when people tell me they are going through an amicable divorce. They just haven’t got to the bad bit yet. But perhaps I’m wrong. Perhaps I’ve just NEVER seen an amicable divorce. Perhaps they exist between reasonable people, and here in Honour, we see how these two women, forget Frank because he’s largely clueless, or at least pretends to be clueless, carve out their territory. Honour seems very real. Long term separated spouses are shaken up when a third person enters the equation and wants more. All the characters have to reconfigure their roles and some of the moves are petty, some are poignant and all are sad.