The True History of the First Mrs. Meredith and Other Lesser Lives: Diane Johnson

I’d never heard anything about Mary Ellen Peacock Meredith (1821-61) before I picked up Diane Johnson’s book, The True History of the First Mrs. Meredith and Other Lesser Lives. If you’d described the book to me, I probably would have rejected it as there are aspects to this history that would normally drive me crazy.  But the book, which is described as an “alternate biography”  and includes hypothetical and occasional filling in of gaps, is quite extraordinary. The author argues, and proves, that while Mary Ellen Peacock Meredith existed as an aside in other, more famous, peoples’ lives she had a rich and historically ignored life of her own.

The life of Mary Ellen is always treated, in a paragraph or a page, as an episode in the lives of Peacock or Meredith. It was treated with a certain reserve in the early biographies because it involves adultery and recrimination, and makes all the parties look ugly. More recent biographies of Meredith repeat the received version of the story with a brisk determination, a kind of feigned acceptance: we know that these things, regrettably, do indeed happen.

Mrs. Meredith’s life can be looked upon, of course, as an episode in the lives of Meredith or Peacock, but it cannot have seemed that way to her.

Mary Ellen was the daughter of Thomas Love Peacock, married and widowed within a brief period of time, and then she met George Meredith who was 7 years younger. And what a miserable old sod Meredith sounds like. So perhaps it’s no wonder that Mary Ellen took a lover and ditched her neglectful spouse, but there was no happy ending for Mary, and who could have expected it in the 19th century. 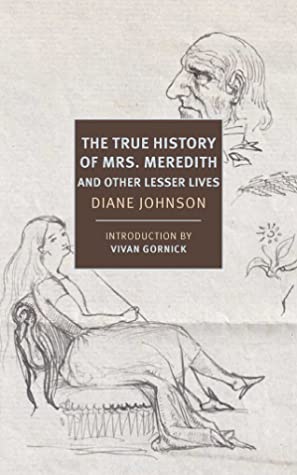 Mary Ellen’s first husband was Edwards Nicholls, “the wild, sexy son of a general of the Royal Marines,” and they were married, happily by all accounts, for a few “glorious months,” before he drowned trying to rescue a friend. Mary Ellen, 23 years old, returned home to her father, a pregnant widow. Four years later, she met George Meredith, “a brooding neurasthenic fussy about his food, obsessed with achieving literary success, and hardly ever wanting to leave the house.” They were “together” for 8 years.

After running off with her lover, Mary Ellen died of kidney disease in 1861. Convenient for many perhaps and thus she sank into history. Yet author Diane Johnson shows that Meredith, who used a flexible version of the truth whenever he recalled his former wife, never really recovered from the relationship–continually working her character, “drawn from his evergreen memories,” into various forms in his novels.

He had never ceased to brood over her–her presence is invoked in novel after novel.

The book opens, after an excellent introduction from Vivian Gornick, with Mary Ellen’s poorly attended funeral. It’s a somewhat fanciful beginning with some details that surely must be speculative (the young vicar is embarrassed, for example) but instead of being annoyed, as I usually am by such fancies, I was drawn into the misty story of Mary Ellen, a woman whose short life wasn’t much fun, who struggled with poverty and abandonment and was haunted by the knowledge of an imminent early death.

Snippets of Mary Ellen’s childhood underscore her somewhat unconventional upbringing thanks to her “too-indulgent” father. Literary figures dot Mary Ellen’s life: James Hogg, Mary Shelley, and Claire Clairmont. These details hint at the inevitable rebellion of Mary Ellen when faced with the loneliness of a drab marriage, so it’s no great surprise that she fell in love with pre-Raphaelite artist, Henry Wallis, But Mary Ellen may have been born in the Romantic Age, but she was married in the Victorian Age, and Victorian attitudes to scandal buried her story.  Her poignant letters and notebooks reveal the realities of her married life to Meredith coupled with details of a troubled, rich inner life. Since Meredith lived to a ripe old age while the long-deceased Mary Ellen faded into obscurity, Meredith controlled both the narrative of his dead wife’s character and also the narrative of their life together. And the truth? Meredith kneaded the truth into an acceptable narrative even hinting that he had been trapped into marriage by Mary Ellen when certainly her literary connections gilded the deal.

Somewhere, in some British parlor, she looks out of a painting called Fireside Reveries, and the people who see her every day may wonder–or perhaps it never occurred to them to wonder–whether the lady over the mantel was ever anyone real.

2 responses to “The True History of the First Mrs. Meredith and Other Lesser Lives: Diane Johnson”