Nestor Makhno–Anarchy’s Cossack: The Struggle for Free Soviets in the Ukraine 1917-1921

“Let us be dauntless to the point of madness.”

Was Ukrainian anarchist Nestor Makhno an out-of-control bandit as Trotsky claimed, or was he a major significant force against both the White Russians and later the Bolsheviks? The phenomenal book Nestor Makhno-Anarchy’s Cossack: The Struggle for Free Soviets in the Ukraine 1917-1921 by Alexandre Skirda examines Makhno’s extraordinary–seemingly buried and forgotten–life and his role in Russian history.

In this incredibly well researched book, Skirda traces Makhno’s humble beginnings as a Ukrainian peasant of Zaporog Cossack stock and his valiant attempts to create a social revolution in Russia in the early tumultuous years of the 20th Century. In 1906, Makhno joined an anarchist group in his hometown of Gulyai-Polye and became involved in militant activities against state oppression. By the time he was 18, Makhno was imprisoned on a variety of charges, and several members of the anarchist group were executed. Makhno, however, began a prison sentence and served nine years until he was released in March 1917 following the ousting of the Tsar. During these nine years, Makhno’s health was severely compromised, but he used the time to access the prison’s extensive library. He also learned that “intellectual and political bigwigs” were granted preferential treatment in the prison system and maneuvered themselves into positions as “masters and governors.” 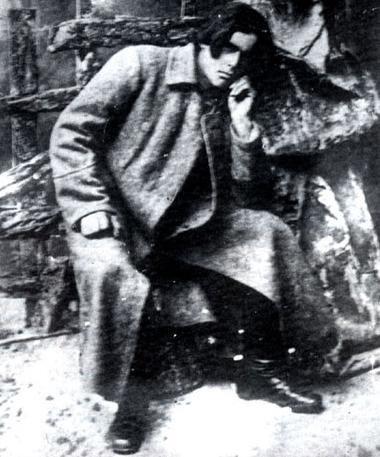 Upon his release, Makhno quickly became involved with the organization of the Gulyai-Polye Peasants’ Union. Makhno’s goal, to establish Free Soviets (soviet=council) included the elimination of prisons, the establishment of a free press, and the creation of communal life through the “collectivization of the land, factories and workshops.” Makhno envisioned a life “without masters or slaves, with neither rich nor poor.” The region moved towards social revolution when land was reclaimed from wealthy landowners, but soon German-Austrian troops occupied the Ukraine, and found sympathizers with the disenfranchised bourgeoisie and feudalists. As a result, Makhno became a high-profile insurgent wanted by the authorities. And so began Makhno’s amazingly bold guerilla life.

By late 1917, as the situation in Russia unraveled, the country was on the brink of a civil war. White Russians occupied the Ukraine. As a witness to the incredible, mind-boggling brutality and excesses of the White Russian army, Makhno recognized the need to rid the Ukraine of the Whites, and organized the Makhnovist Army–a “vast insurgent movement.” Swallowing the idea that the Bolsheviks could be trusted, he “placed the revolution’s interests above ideological differences” and joined forces with the Bolsheviks against the White Russian army. Makhno had not yet grasped the “monstrous amorality … of Bolshevik politics.”

Skirda follows the treachery of the Bolsheviks–who, fearing Makhno’s power and refusal to bend to Bolshevik ideology, practically stopped the civil war several times in order to shift to the elimination of Makhno. This is a portrait of an incredible man–a methodical, strategic thinker, and a fierce warrior. The master of the surprise attack, Makhno grasped how to turn the odds (small numbers of men who were vastly outnumbered) into an advantage. On one occasion, he even dressed as a woman, and once when wounded, he was scooped up by two of his men on horseback. The two men held their rifles to each other–forming a cross, and the wounded Makhno, crouching on the crossed rifles escaped from the enemy. 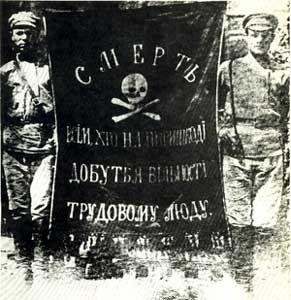 For anyone interested in the Russian Revolution, this book is a fantastic, unforgettable read. The author wisely includes sections on the history of the Ukraine and the Cossacks, maps, analyses of major battles, Makhnovist documents and several black and white photographs. Each chapter is followed with notes on the text. Packed with incredible details of the major battles, Skirda presents nothing less than an exciting history of a man who seized his moment in time. Skirda also clarifies several points–for example, he explains the origins of the term “White Russian”–the volunteer army under General Kornilov sported white ribbons to distinguish themselves from the enemy. Skirda also emphasizes that the anti-monarchist White Russian, General Kornilov, was the man who ordered the arrest of the Tsar and his family, and thus it’s clearly understood that the term “White Russian” does not automatically mean monarchist. Major figures from the Russian Revolution appear throughout the text–General Denikin (Kornilov’s successor), Baron-General Wrangel, Lenin, and Trotsky. Entire Red divisions deserted the Bolsheviks and defected to Makhno’s cause, and Skirda details it all–the slaughter, the treachery, the shameful history, and the ensuing myths as history is cleaned up for the classroom. Masterfully and smoothly translated by Paul Sharkey.