First the disclaimer: I have not read Marcel Proust’s Remembrance of Things Past. Several years ago, I started to read the first volume and while I enjoyed it, something came along which distracted me from my reading project. Since this was a work that I really wanted to pay attention to, I decided that the time wasn’t right. I meant to return to Proust, and I will, thanks to the encouragement of other bloggers, so when I saw the nonfiction book Monsieur Proust’s Library from Anka Muhlstein, I decided to read it as a sort of enticement–an encouragement, if you will. But there’s another reason I decided to read Monsieur Proust’s Library: last year I read and enjoyed Balzac’s Omelette from the same author. As anyone who has read Balzac knows, it would be easy to spend one’s entire life analysing and dissecting La Comédie Humaine, but author Anka Muhlstein wisely chose to examine the place of food in Balzac’s work. This now brings me to Monsieur Proust’s Library, and here the focus is books and reading in Remembrance of Things Past. 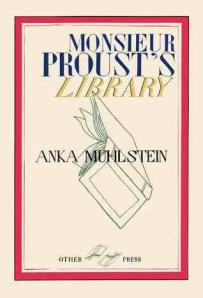 I’ll admit that I would have got more out of this book had I read Proust’s work, but on one level, while Monsieur Proust’s Library is an academic work, it’s also very user-friendly, so even if I didn’t know who some of the characters were, their place in Proust’s world was adequately explained. So in other words, if you haven’t read Proust yet, or you’ve only read bits, then don’t be put off of this book as it illuminates a particular accessible thread that runs through Proust’s work. The author acknowledges that while “there are many ways of approaching a novel as complex as La Recherche,” she elected to “shed light on subjects as varied as Proust’s literary affinities, his passion for the classics, his curiosity about contemporary writers, and his knack of finding astonishingly apt quotations to put in the mouths of his characters.” And so for around 160 pages, the author appears to have great fun picking out just how books and reading fit into Proust’s masterpiece. Here’s one of my favourite quotes:

Proust seemed incapable of creating a character without putting a book in his hands. Two hundred characters inhabit the world he imagined, and some sixty writers preside over it. Certain of them, like Chateaubriand and Baudelaire, inspired him, while others, Mme de Sévigné, Racine, Saint Simon, and Balzac enhanced his personages.

The author explores Proust’s early reading life and how books “enabled him to escape the narrow confines” of his world (I’m sure most of us can relate to that), and the influence of Baudelaire and Ruskin on La Recherche before moving onto the contributions of Racine and Balzac’s work. I was delighted to learn that Proust was influenced by Balzac, and yet theirs was not an overwhelmingly positive reader-writer relationship. Anka Muhlstein notes that Proust “never claimed to be fond of the great nineteenth century novelist,” and instead Proust’s noted favourites were Racine, George Eliot, Thomas Hardy and Baudelaire. Proust considered Balzac’s work to show a “certain lack of elegance,” and “an obsession with the ways in which money is made.” At the same time, however, Muhlstein argues that Proust was an avid reader of Balzac and admired him for his use of re-appearing characters and “audacious treatment of sexual deviation.” And I’ll admit a certain gratification to learn that Proust greatly admired Dostoevsky, and when once asked which was ‘the most beautiful novel he ever read,” he selected The Idiot. Dostoevsky is worked into La Recherche in several ways, including through the analysis of his work in the “literature courses the Narrator inflicts on Albertine.”

The author argues that Proust “establishes a hierarchy” for the book’s characters with some being ‘good’ readers and other characters being poor readers, either for the choice of reading material or for their utter lack of understanding of the material at hand. According to Muhlstein, “every bad reader exemplifies a distinct moral or intellectual shortcoming,” so we see Professor Brichot (“Proust has little regard for academics“), Mme de Villeparisis and Mme de Brissac who are all sadly lacking as readers. Oriane, Duchess of Guermantes, on the other hand, uses books to wield “a wonderfully subtle form of domination” over others in her social circle, while Baron de Charlus, (inspired, argues Muhlstein by Balzac’s Vautrin) is so obsessed with literature that he acts out parts of Saint Simon’s memoirs.

A life without books was inconceivable for Proust. Not surprisingly, he made literary taste and reading habits a means of defining his characters. Everybody in La Recherche reads: servants and masters, children, parents and grandparents, artists and physicians, even generals. Conversations at dinner tables and among friends are mostly literary.

I’ve always thought that if I wrote fiction, I’d have great fun creating characters who were composites of people I really couldn’t stand as well as a few I’d really liked. In other words I’d have a sort of literary and social revenge, so I throughly enjoyed reading about Proust’s characters as good, bad, or indifferent readers.

Another marvellous aspect of the book is the way glimpses of Proust peer through the pages. We see Proust not just as a writer, but also as a reader–someone for whom reading was a serious business. We learn about how as a child “he cried at the end of every book and was unable to go to sleep, desolate at the idea of leaving the characters he had grown attached to.” But this is Proust in childhood. Anka Muhlstein shows an adult Proust writing La Recherche applying all that was dear to him and yet also playing with those ideas through his characters.

It’s always interesting to know who authors were influenced by, who their favourite writers and their favourite books were, and the fact that Proust read & was influenced by Balzac, in spite of his flaws, tells me that I’ll really like La Recherche when I get to it, and I sense that reading Monsieur Proust’s Library has not only prepped me for The Big Read, but will also help me enjoy the novels when I finally get to them.