The Waitress Was New: Dominique Fabre

Dominique Fabre’s Guys Like Me is the story of a divorced, lonely, fifty-something office worker, a gray, balding Everyman who could be one of the hundreds of similar anonymous-looking men we see everyday. The Waitress was New is narrated by a similar type, but this time it’s Pierre, a fifty-six year old barman who works in Le Cercle, a restaurant in Paris. Madeleine, the waitress of the title plays a very small role in this story; she’s a temporary replacement for the regular waitress, Sabrina, who may or who may not be out on sick leave.

The Waitress was New is a look at a very small slice of life as Pierre goes through a few work days, copes with various problems and mainly looks forward to retirement. Pierre was married for eight years a long time ago, and he occasionally recalls his last girlfriend, so unlike the protagonist in Guys Like Me, romance and sex are both things in the past for Pierre. Pierre notes the messy personal lives of others while he seems to appreciate his uncomplicated solitary life and his friendships. Unfortunately employment at the restaurant suddenly becomes problematic and less secure when the boss, a middle-aged man named Henri, “slips out on the sly.” He doesn’t return. 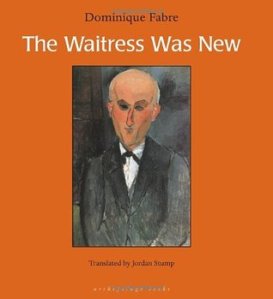 The boss has had affairs in the past and in spite of owning a business, isn’t the most reliable of men. When Henri fails to return, those who remain at Le Cercle scramble to share the workload in the boss’s absence. Pierre, like most barman, is a good listener, and so that’s probably why he finds himself listening to the boss’s wife Isabelle. The general consensus in the restaurant is that Henri must be having an affair with the coincidentally absent Sabrina.

As a barman with regulars, he gets to know his customers well and he has favourites. There’s a developer who comes in three times a day, runs up a tab and has the occasional breakdown

Sometimes we talk, which for a barman means I listen while he throws out sentences that don’t always know where they’re going, about his life, his career, his children. He has three, with three different wives. The oldest of the girls is thirty, and he’s just turned sixty. They look a lot alike. Sometimes they eat together at Le Cercle. She’s a psychiatrist at Marmottan Hospital. She must be his favorite, I’ve never seen the others. Does she know her daddy makes a habit of undressing in Le Cercle to go throw himself in the Seine when he’s had one too many?

That’s an example of the embedding of other stories in the narrative. This character, a developer, since he’s not a main focus, is not explored, but this is not a flaw in the novel. Instead it’s a reflection of how people linger in the periphery of our lives and how we don’t really know the stories of all those we meet. It’s easy for us to imagine this man’s chaotic life–three wives, three children. Is the oldest the favourite as Pierre imagines or is she the only one who speaks to him?

Also the novel has a graceful way of showing how life flows on in spite of interruptions and radical changes. People adjust and move on, and we see this through the ebb and flow of customers as they stream into Le Cercle from habit and then are diverted elsewhere.  At 117 small pages, this is a quick, quiet, simple read. There are no deaths, no chases, no love scenes–this is just a glimpse at the life of an ordinary working man who faces a crisis at work and must handle the situation as he has handled many other problems in the past. Pierre is an engaging, old-fashioned narrator–a quiet man, on the serious side who has a very particular way of speaking and frequently punctuates his thoughts with a handful of expressions.

There was a young couple camped out at a table in back. I went over and started to clean up all around them, but they kept right on making out. They were getting on my nerves, the boss’s wife still hadn’t come down. I told the holdouts that closing time had come. In England they have a bell, when it rings the people leave without making a fuss, as orderly as you please. The boss’s daughter says there are always taxis waiting just for the drunks, with a special rate. That place must be a boozer’s paradise. Oh Pierrot, am I tired. This was a fine establishment before the boss started chasing after his life. The young couple finally left, they seemed very much in love, the way people are when it’s part-time, if you don’t mind my saying.

While Guys Like Me has more substance, it would easy to dismiss The Waitress was New as a pleasant, refreshing little tale about an ordinary man who lives an ordinary life, and who has the sort of anxieties and concerns that most of us have. This is an extremely well-crafted look at the minutiae of daily life through the eyes of a credible Everyman. While Pierre briefly touches on mistakes he’s made, he also accepts that there’s no point in dwelling on that which he cannot change, and while the boss is evidently in the throes of a mid-life crisis, Pierre is long past that point. Oddly fascinating and charming due to Pierre’s stoicism and sense of duty in the face of a meltdown, The Waitress was New comes recommended to fans of modern French fiction.

19 responses to “The Waitress Was New: Dominique Fabre”