“In my dreams I call out to them, but they keep on walking, until finally they disappear from sight.”

Magda Szabo’s wonderful novel, moves from 1934 to 1968 as it follows the fate of three neighbouring Hungarian families who live in Katalin Street. When the book opens in post WWII, surviving members of the families live, communally, not far from their original homes. These surviviors have been washed through various sweeping events: from normality to fascism and now … “social rehousing” under communism in a depressing Budapest flat “on the sixth floor of a relatively new block.”

No work of literature, and no doctor, had prepared the former residents of Katalin Street for the fierce light that old age would bring to bear on the shadowy, barely-sensed corridor down which they walked in the earlier decades of their lives, or the way it would rearrange their memories and their fears, overturning their earlier moral judgements and system of values.

But no one had told them that the most frightening thing of all about the loss of youth is not what is taken away but what is granted in exchange. Not wisdom. Not serenity. Not sound judgement. Only the awareness of universal disintegration.

First seen in the 30s, the families are the widowed noble Major Biró and his son Bálint, whose care is overseen by the housekeeper, Mrs Temes; earnest schoolteacher Elekes, his frivolous wife, and their two daughters, Irén and Blanka. Finally there’s the Jewish family, the Helds, with war hero, dentist Dr. Held hoping his medals bring protection for himself, his wife and their only child, the fey, fragile Henriette. After WWII, the Elekes are the only intact family. The Helds have been exterminated, but the ghost of little Henriette lingers over the families, unable to move on, curious about the fates of the people she knew so well. 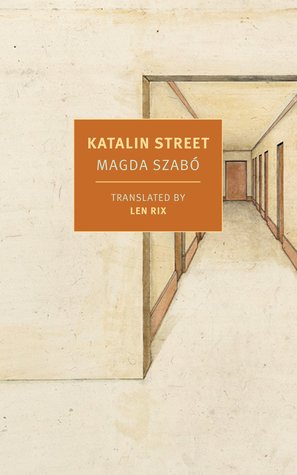 The novel opens in the 50s with the straggling members of the two surviving families, now three generations deep, living together in the tiny flat with just a few pieces of furniture from their former homes. Mr Elekes, whose belief system has been completely destroyed is taken out for a walk twice daily “as you would a dog.” Blanka, who clearly is disturbed, lives far away on a Greek island, and her strange disconnection isn’t seen as a cause for alarm by her mother-in-law, but the signs of a good “biddable” daughter-in-law. The plot goes back in time to 1934 with some of the story told by Irén and with the narrative also slipping into third person. These characters discover that their morality clashes with ever-changing politics; it’s “no longer safe” to mention friendships or beliefs. A man can be a war hero one day and an enemy of the people the next. A woman can be a good party member one year and a Stalinist informer the next.

If the idea of a ghost as a character puts you off, as it did me, then be reassured. Somehow, in this quiet, melancholic novel, Magda Szabo creates a ghost as a believable character. The surviving characters, haunted, literally and figuratively, cannot move away from their shared pasts, and so it seems perfectly natural that Henriette should remain locked in connection with those she knew in life. She can visit the past and the present, yet unable to help the people she observes, she serves as a witness of the terrible cost these living characters have paid for survival.

In spite of its serious subject matter, there’s a glorious lightness to the novel. Yes, surviving characters are irrevocably destroyed by events that took place, but there’s a playfulness here which pulls the story from depression, and the playfulness is mostly manifested in the ghost of Henriette who is able to visit the home of her past and drop in to visit her loving parents as they go about their daily tasks. Henriette rubs elbows with their ghostly forms but they have the tendency to become disturbingly immature in the presence of their parents.

When they spoke to her they did so as the parents she had known, but if their own parents came looking for them, or if they wanted to be with their parents, they would instantly change and become noisy and boisterous. Mr Held. once so quiet and reserved in his speech, would begin to fret, or shriek with laughter and gabble nonsense;upon which her grandfather whom Henriette would in normal circumstances have been delighted to see, would seize him by the wrists and swing him around until he squealed with joy. Whenever Mrs. Held saw her own parents approaching she would immediately push Henriette away and start to yell, “Mummy, Mummy!” clapping her hands and spinning around.

Henriette shows us an alternate version of time in which the trials of the present are a mere phase. Henriette, who longs to see the people she loved as they once were–happy and optimistic–is perhaps, ultimately, the luckiest character of the lot. The living “ached with longing for the dead,” but at least she can visit the past that the others dream of.