“Perhaps he also senses the dark wings of destiny beating.”

In Triumph and Disaster: Five Historical Miniatures, Stefan Zweig explores five moments from history, and with great style he recreates these moments showing instances of human failing, victory and sometimes just the fickle hand of fate. The introduction builds Zweig’s premise as he tells us that in life, “a great many indifferent and ordinary incidents happen” but that “sublime moments that will never be forgotten are few and far between.” In this collection, Zweig isn’t interested in the ordinary–instead he hunts for the “truly historic shooting star of humanity.”

What usually happens at a leisurely pace, in sequence and due order, is concentrated into a single moment that determines and establishes everything: a single Yes, a single No, a Too Soon, or a Too Late makes that hour irrevocable for hundreds of generations while deciding the life of a single man or woman, of a nation, even the destiny of all humanity.

Here are the five sections of this book which runs to just over 160 pages:

The Field of Waterloo

The Race to Reach the South Pole

The Conquest of Byzantium

Of the five chapters The Field of Waterloo and The Conquest of Byzantium are my favourites. That may partly be because I still have queasy memories of Beryl Bainbridge’s The Birthday Boys from last year, so I was overdosed when it came to the story of the 1910 catastrophic journey to Antarctica. 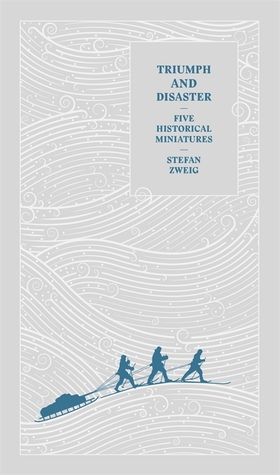 The Field of Waterloo is simply magnificent. Most of us have the rudimentary facts of the battle–who won and who lost, but Zweig recreates this incredible moment in history, and brings this episode to life.

Destiny makes its urgent way to the mighty and those who do violent deeds. It will be subservient for years on end to a single man–Caesar, Alexander, Napoleon–for it loves those elemental characters that resemble destiny itself, an element that is so hard to comprehend.

Sometimes, however, very seldom at all times, and on a strange whim, it makes its way to some unimportant man. Sometimes-and these are the most astonishing moments in international history-for a split second the strings of fate are pulled by a man who is a complete nonentity. Such people are always more alarmed than gratified by the storm of responsibility that casts them into the heroic drama of the world.

And that brings me to Waterloo.

The news is hurled like a cannonball crashing into the dancing, love affairs, intrigues and arguments of the Congress of Vienna: Napoleon, the lion in chains, has broken out of his cage on Elba.

He gives command of this pursuing army to Marshal Grouchy, an average military officer, brave, upright, decent, reliable. A Calvary commander who has often proved his worth, but only a cavalry commander, no more. Not a hot-headed berserker or a cavalryman like Murat, not a strategist like Saint-Cyr and Berthier, not a hero like Ney. […]

He is famous only for his bad luck and misfortune.

And I’ll stop there. The Field of Waterloo is thrilling and breathtaking, full of Napoleon’s futile hopes and desperation. Zweig paces this perfectly. The Conquest of Byzantium is nail-bitingly tense,  and this section begins with the rise of Sultan Mahomet, a man whose intense duality of passions leads him to “take Byzantium” by siege, and the scene is set with Mahomet’s army of 100,000 men and the city under siege with just 1,000 soldiers who wait “for death.” The descriptions of the fighting are breathtakingly intense, and then “the fate of Byzantium is decided” by an open gate. The Sealed Train, the story of Lenin’s return to Russia, has an ominous undertone to it, and Wilson’s Failure (the Treaty of Versailles) follows Wilson’s health struggles set against the divisiveness of politics of the time.