Nothing Can Hurt You: Nicola Maye Goldberg

“At a certain point, you realize the world is so bad, that it’s easier to pretend that people deserve the terrible things that befall them. That way, at least, you can pretend that you are safe.”

In a series of interconnected stories centered on the murder of a college student, Nothing Can Hurt You from Nicola Maye Goldberg sensitively examines the fallout from the crime. In 1997, Sara Morgan is  horrifically murdered by her boyfriend, Blake Campbell, and when Blake pleads guilty by temporary insanity, he is acquitted. But this doesn’t end the story for those who are involved, touched, and haunted by Sara’s death in one way or another. 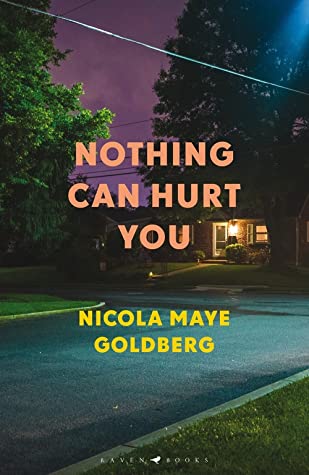 The book begins strongly with an opening section from a young, damaged married woman named Marianne. She’s moved to upstate New York along with her husband, and while their new idyllic home makes it seem that they “had wandered into a painting,” the darkness in Marianne’s head remains. There are hints that the root cause of her “episodes” lies buried deep in her past. Yes you can move to the country, buy a big house, and get a dog, but these are just the trappings of normalcy. Marianne is damaged and nothing’s going to change that.

It’s Marianne who finds Sara’s body in the woods. There’s some debate whether Sara was the victim of serial killer, John Logan, who operated in the area, but Blake Campbell’s confession eradicates that theory. As the book continues we meet characters who are caught in the ripples that form in the wake of Sara’s murder. Many of the characters knew both the victim and the killer, and find it impossible to align the events that took place. And what of Blake who walked away from the murder and spent a short time in an upscale Rehab center?

Katherine, an alcoholic, meets Blake at the Paradise Lake Recovery Center. He’s young, handsome and a reader like Katherine. Katherine hears the “gossip” that Blake murdered Sara, but she finds it hard to believe that Blake is capable of such violence. Blake’s friend, Sam, the owner of the knife used to kill Sara is still haunted by her death. He’s plagued by bad dreams, dissects the past to try to look for clues he missed about Blake, and even now, years later, the murder stains Sam’s personal life.

In this chorus of voices, there’s a third circle of people–not family, not friends, but still people touched by the crime. During the trial of serial killer, John Logan, Juliet, a reporter who works for a small local paper in upstate New York meets Celeste, a veteran NY reporter who’s feeling burnout from all the violence. Juliet, at the beginning of her career becomes obsessed with Sara’s murder

“How so they manage it? Serial Killers?” I asked Celeste once. “I can barely keep my shit together, and I only have one job.” I was having a lot of days when things like showering and buying groceries seemed not only pointless but basically impossible.

“It energizes them,” she said, without hesitation. “They’re at work, they’re waiting in line at the DMV, whatever, and they’re thinking about what they’ve done, what they’re going to do. It’s how they get through the day.”

The families of the victim and the killer are at ground zero when the murder occurs. Sara’s half-sister, Luna grows up in the wake of the murder and eventually cuts herself off from her family. Blake’s family “hired a lawyer, a good one, from New York, to represent their son. Did that make them bad parents? Bad people?” Blake’s sister, Gemma, has managed to detach herself from her family, but she wonders if her daughter is headed for inherited mental illness. A young girl writes to the manipulative serial killer, and Sara’s mother, who years later is a psychic, is called in on the disturbing case of a missing child:

The Stoddards live in what used to be a farmhouse. It’s big for three people. which makes Jonathan think they wanted more children. They moved up here from New York before William was born, probably to escape the terrors and temptations of the city. Inside, it’s beautifully decorated with thick, soft carpets and silver doorknobs. But it smells slightly off, like rotting fruit. On a table by the front door is a crystal vase full of nothing but dirty water.

Threading through the stories is the dark, inexplicable nature of violence. There’s random violence against strangers, and then there’s violence against people we say we cherish the most. We look for reasons for violence–not just the solution to a crime, and that’s what’s so disturbing about Sara’s murder; there are no answers.

Some victims stay victims but others … well others who face monsters learn what they are capable of. As Josephine Hart writes in Damage:  “Damaged people are dangerous. They know they can survive.” Marianne shows just how dangerous she can be when another man makes a clumsy pass. It was at this early point in the book, that I knew I was reading something special.

The snow had fallen so heavily overnight that Ted could not get his car out of our driveway. He and my husband spent all day watching TV, playing Risk, and drinking whiskey. They ate leftovers. I pretended to be busy in bed with a book, when I was really sitting with the emptiness. For the first time I longed for one of my visions. I wanted to see Ted’s head crack open, to see myself scooping out his brain with my fingernails.

4 responses to “Nothing Can Hurt You: Nicola Maye Goldberg”