The meaning of the title of this, a short novel from Muriel Spark, becomes clear by the time the book concludes. The Girls of Slender Means is set in an-all female residence, The May of Teck Club. It’s London 1963 in this frame story, and The May of Teck Club has been in existence for decades. Originally, it was intended “for the pecuniary Convenience and Social Protection of Ladies of Slender Means” below the age of thirty. The 30-year rule has long been ignored and many of the female residents have lived at The May of Teck Club for decades. The novel is jump-started by the news of the death (murder) in Haiti of Nicholas Farringdon, a Jesuit at the time of his death. 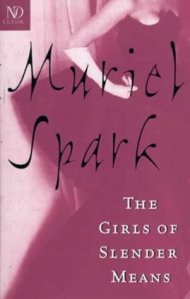 The novel goes back and forth from the present (1963) to 1945 and opens in London with a vivid depiction of bombed-out buildings.

The streets of the cities were lined with buildings in bad repair or no repair at all, bombsites piled with stony rubble, houses like giant teeth in which decay had been drilled out leaving the cavity. Some bomb-ripped buildings looked like the ruins of ancient castles until, at a closer view, the wallpapers of various quite normal rooms would be visible, room above room, exposed as on a stage, with one wall missing; sometimes a lavatory chain would dangle over nothing from a fourth or fifth-floor ceiling; most of all the staircases survived, like a new art form, leading up to an unspecified destination that made unusual demands on the mind’s eye.

So in 1963, when “woman columnist,” Jane Wright hears of the death of Nicholas Farringdon, she contacts acquaintances she knew back in 1945, people who also have slivers of memories of the dead Jesuit. Those who remember him, recall that Nicholas was the lover of Selina, a resident of The May of Teck Club. That’s his claim to fame as far as the residents, or former residents of The May of Teck Club are concerned. Then the story peels back the decades to the story of what happened during that brief period of 1945. Although The May of Teck Club is the home of dozens of young women, we are only concerned with the fate of a handful: including the beautiful, capricious, and fickle Selina, saintly rector’s daughter Joanna Childe, and Jane Wright. The residence houses just women, but some of the female residents pass through a narrow slit window which grants access to the flat roof of the club. It’s here that lovers meet.

This is a peculiar book replete with Muriel Spark’s dark (I’m going to say it: ‘twisted.’) wit. While the plot is far removed from The Driver’s Seat, nonetheless, the connection is the bizarre undercurrent worming its way under what appears to be a fairly non-exciting plot. On one level there’s a shocking incident that occurs in 1945 and that is linked, somehow, to the death of Nicholas Farringdon. It’s not a direct thread–Muriel Spark is too subtle for that. Instead it’s a question of how did Nicholas Farringdon, anarchist/poet, end up as a martyred Jesuit in Haiti? There’s no definite answer to that, but it’s a matter of connecting the dots.