Lives and Loves of a She-Devil by Fay Weldon

“She devils are beyond nature: they create themselves out of nothing.”

I expect that many people who read this post will have seen the film, Lives and Loves of a She-Devil. The film is a lot of fun, but it doesn’t really do justice to the Fay Weldon novel on which it’s based. The film with Roseanne Barr and her rival in life and love played by Meryl Streep is really very funny, but the book is much, much darker, and while like the film version, this is a tale of revenge, the book is much more subversive and its humour is black. You’ll laugh at the film but chances are you won’t have the same reaction to the book. Lives and Loves of a She-Devil was the first Fay Weldon novel I read, and it sealed me as a fan. Weldon is an outspoken feminist writer who’s come in for her share of controversy, and simply because she is a figure of some controversy, she’s all too easy to misquote. 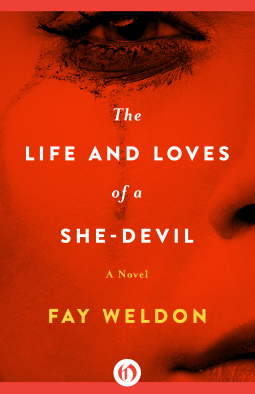 While Weldon’s work obviously fits in any feminist canon, her work can also be considered Transgressive fiction for the way her marvelous characters subvert societal norms. Weldon’s frequent themes include gender inequality, female reinvention, female identity and self-image and the often vicious relationships between women. Lives and Loves of a She-Devil is a tremendously powerful story–the tale of how one woman, a wife and mother, is abandoned by her husband and replaced by a prettier, sexier woman. Rising from her despair and thrusting aside all societal norms, maternal concerns, & obligations the discarded woman eventually triumphs over her enemies. Yes, a story of female empowerment and a rather frightening tale of a woman scorned who, because she’s willing to go as far as necessary, learns to live her life according to an entirely new set of rules.

Ruth, an overweight, unattractive woman who’s 6′ 2″, is an excellent wife and mother. While she’s appreciated by her somewhat scatter-brained in-laws, she’s neglected and undervalued by her accountant husband, Bobbo, who at the best of times says that Ruth is “no beauty, but a good soul.” Ruth, who is virtually powerless in the relationship, does everything to please Bobbo, even tolerating his announcement that he wants an “open marriage.” She’s aware of his extra-marital affairs which he discusses with relish, but now Bobbo has fallen in love with one of his clients, Mary Fisher, a wealthy, prolific author of trashy romances. Ruth is trying her best to ignore the affair, but after a particularly degrading scene, Bobbo moves out of his home in the suburb of Eden Grove, abandons his wife and two children and moves to Mary Fisher’s splendid home, the High Tower.

Fay Weldon’s style is spare, low on descriptions and high on mythic qualities. This is how the novel, alternating between first and third person narrative, opens:

Mary Fisher lives in a High Tower, on the edge of the sea: she writes a great deal about the nature of love. She tells lies.

Mary Fisher is forty-three, and accustomed to love. There has always been a man around to love her, sometimes quite desperately, and she has on occasion returned that love, but never, I think, with desperation. She is a writer of romantic fiction. She tells lies to herself and to the world.

Is that hate or contempt lying under the description of Mary Fisher? Probably a bit of both, but add envy to the mix too as Mary Fisher is the embodiment of everything Ruth isn’t: small, petite, feminine and highly desirable. And here’s a quote that shows just how well Fay Weldon can write:

Now outside the world turns: tides surge up the cliffs at the foot of Mary Fisher’s tower, and fall again. In Australia the great gum trees weep their bark away; in Calcutta a myriad flickers of human energy ignite and flare and die; in California the surfers weld their souls with foam and flutter off into eternity; in the great cities of the world groups of dissidents form their gaunt nexi of discontent and send the roots of change through the black soil of our earthly existence. And I am fixed here and now, trapped in my body, pinned to one particular spot, hating Mary Fisher. It is all I can do. Hate obsesses and transforms me; it is my singular attribution.

While Bobbo and Mary Fisher have the looks, the power and the money on their side, Ruth is dumped with the two squabbling children, a gluttonous vomiting dog who humps anyone lower on the totem pole, a cat who fouls the house, and an unfortunate guinea pig. Bobbo and Mary live in sex-soaked idyllic bliss while Ruth suddenly has to worry about money–how to pay bills and buy food (there’s one great scene in which Ruth directs the children to search the house for coins). To add to the worries, Bobbo tells her to move to a smaller, cheaper home. Part of Ruth accepts what has happened to her–after all, she reasons “to those who hath, such as Mary Fisher, shall be given, and to those who hath not, such as myself, even that which they have shall be taken away.”

Ruth has always behaved well and put Bobbo’s needs before her own. Why shouldn’t she accept divorce, destitution and displacement and be happy for the few years she had? But Ruth doesn’t see it that way, and she doesn’t react the way Bobbo expects her to.  Strangely, once removed from the position of wife, something begins to happen to Ruth. Liberated from her own repressive behavior,  “Hate obsesses and transforms” her, and she has revenge in mind. As events unfold, it becomes clear that revenge is an emotion that can take you to the place you want to go. Ruth abandons the roles assigned to her: doting wife, patient mother and begins a transformative journey–both literal and figurative, and along the way she confronts other women in various miserable circumstances including a clueless welfare mother who’s impregnated by a series of transient rogue males, a group of Wimmin, and also the much-abused wife of a judge who has a secret “passion for bondage and whips.” As Ruth continually reinvents herself, she leaves an imprint on the lives of everyone she touches, and rather magnificently, she becomes all the things her husband, to assuage his guilt, accused her of. She becomes a She-Devil who “creates havoc and destruction all around,”  and by abandoning the roles she is expected to endure, and breaking all the “rules” she plots her revenge…

Since this is a Weldon novel, the economic poverty of women is evident, but Weldon is not a man-hater; rather she revels in the power of sexuality, and she’s also very funny:

“She’s such a good wife,” said Bobbo’s mother, moved almost to tears. “Look at that ironing!” Bobbo’s mother never ironed if she could help it. In the good times indeed, she and Angus liked to live in hotels, simply because there’d be a valet service. “And what a good husband Bobbo has turned out to be!” If she thought her son was narcissistic, staring so long in the mirror, she kept her thoughts to herself.

But Bobbo looked in the mirror at his clear, elegant eyes, his intelligent brow and his slightly bruised mouth, and hardly saw himself at all; he saw the man whom Mary Fisher loved.