The Will to Kill: Mickey Spillane & Max Allan Collins

Where there’s a will …

In The Will to Kill, Mike Hammer is back in a tightly-woven PI tale of greed, dysfunctional siblings and a legacy of millions of dollars. When the novel opens, it’s past midnight and Mike Hammer has a quiet moment watching the Hudson River. A slab of ice caught by the pier carries strange cargo–half of a body. Hammer asks himself “what was it about me that attracted death? What turned a reflective moment at the waterfront into a damn crime scene?”

The half-a-body is identified as Jamison Elder, a bachelor and a butler in his sixties. The official story, according to his employers, the four wealthy Dunbar siblings, is that Jamison’s sister was ill, and he left the family estate near Monticello, to rush to her side. Somewhere along the way, his car ploughed into a snow bank, and then the story gets blurry. Police speculate that somehow or another Jamison fell into the river and suffered extensive injuries that caused his death. 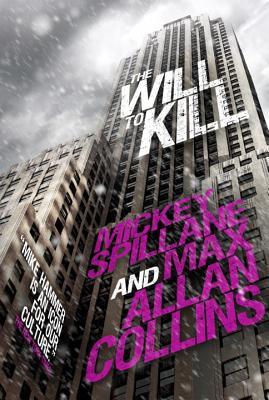 Captain Pat Chambers, Mike Hammer’s old friend, finds Jamison’s death suspicious. Add that to the death a few years earlier of Jamison’s employer, ex-cop turned inventor, millionaire Chester Dunbar. Chester Dunbar was Chambers’ precinct captain when Chambers graduated from the academy, and now Chambers feels a sense of moral obligation to investigate both Dunbar and Jamison’s deaths. Since the case is outside of Chambers’ jurisdiction, he hires Hammer reasoning that “if Mike Hammer can’t sniff out murder, nobody can.”

Hammer contacts the four Dunbar siblings who live together at the family estate. There’s Wake and Dex adopted by Chester Dunbar when he married their widowed mother, and Dorena and Chickie, Dunbar’s own children. According to Chambers, “two are bums, one’s beautiful and one’s a congenital idiot.” All four Dunbar offspring are waiting for their generous inheritance which only comes their way as they each turn forty.

Hammer stays at the estate, and curiously the three eldest Dunbar offspring welcome an investigation into the death of their father while 20-year-old Chickie is too busy playing with his toys to have an opinion. There’s a lot of dirt and scandal under the surface of the Dunbar estate. Wake is married to a beautiful gold-digger, and Dex is a compulsive gambler. Dorena, a budding playwright, seems to be the only normal one of the bunch, but with millions of dollars at stake in the will, Hammer reasons, “no wonder there’s murder in the air.”

Although this tale is lean, Hammer’s observations, always laced with a bitter humour, give a strong sense of time, place and character. Here he is meeting the Dunbar family lawyer in a low-rent diner:

I went down and slid in opposite him in a high-backed booth, tossing my hat on the table. He had what must have been a sturdy frame before time and pie–he was halfway through a piece of coconut crème-caught up with him. His charcoal worsted would have been too good for the place if it hadn’t looked slept in. The black-and-white silk tie seemed fresh enough

The tale, full of snappy dialogue and Hammer’s wry, cynical wit, rips along with very little down time as Hammer moves from one corpse to another, meeting a number of beautiful, seductive women along the way. A Will to Kill is another product of Mickey Spillane’s unfinished work now seamlessly completed by Max Allan Collins who inherited Spillane’s unfinished manuscripts upon his death. As usual, it’s impossible to tell where Mickey Spillane ends and Max Allan Collins begins, so fans should be pleased.

Tagged as american crime fiction, Mike Hammer, series PI, Where there's a will

3 responses to “The Will to Kill: Mickey Spillane & Max Allan Collins”